Star Trek: The Next Generation: "Up the Long Ladder" 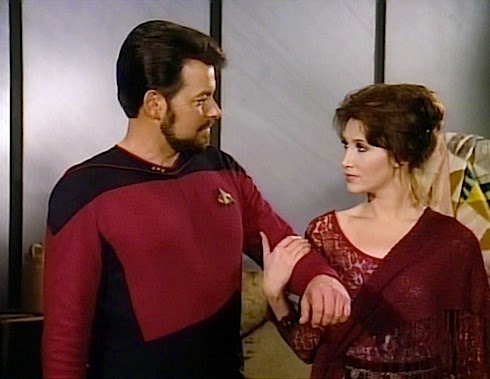 Lt Worf collapses with a Klingon virus, leading to him and Dr Pulaski bonding over poisonous tea. The Enterprise tracks a distress signal and finds not one but two long-lost human colonies. The Enterprise gets filled with sheep. Riker scores with a woman while on duty within hours of meeting her. Riker and Pulaski murder themselves. Picard laughs out loud, and recommends that we all simply embrace the ridiculous.

What the hell is this episode?

I went into "Up the Long Ladder" anticipating something terrible, because I remember really hating it as a teenager. I've come out of the episode more confused than anything else. It is dreadful, let's not skirt the line with that, but it's an odd kind of dreadful where there seem to be about four different episodes struggling to get the audience's attention like a free-for-all professional wrestling match. It's the biggest indication yet that Season 2 of The Next Generation was creatively crippled by the 1988 writers strike; even the scripts they managed to film all feel half-baked and poorly thought-out.

As is generally the case with these busier episodes, let's take the plot threads one by one. Firstly, Worf collapses unconscious on the bridge in what seems to be the premise of the episode. It's not: he recovers in sickbay, learns he has a humiliating Klingon virus usually contracted by small children, and to thank Dr Pulaski for lying about it to the captain he serves her a traditional Klingon tea ceremony and reads her poetry. It's actually quite a delightful scene, and shows a side to Klingon culture that got all-but-devoured once Ronald D. Moore joined the writing staff and took the Klingons in a far more brutal, militaristic direction. I actually rather like what Moore did with the Klingons, but I did miss the more subtle side to their culture from these early seasons. That's all pretty much it for this plot thread, however, since it's over and done with about ten minutes in.

The rest of the episode sees the Enterprise rescue a long-lost human colony from solar flares. The colony deliberately chose to live a utopian, technology-free lifestyle - and for some reason also chose to speak, dress and act like bad caricatures of 18th century Irish farmers. It's mildly offensive, but more than that it's just bug-eyed weird: all of a sudden the main cargo bay is filled with wandering goats, sheep and ducks, and tweedy drunk men in caps saying "t'be sure" and "ar begorrah". Riker has sex with the colony leader's daughter, but strangely this one night stand doesn't even get so much as an awkward morning after because the episode's already moved on to its third main plot of the hour.

It turns out there is another colony half a light year away. This long lost human community crash landed, and the five surviving scientists spent the next 250 years cloning themselves to survive. Their genetic duplicates are beginning to break down, however, and so they beg the Enterprise crew to donate some of their own DNA to save them all from death. The Enterprise crew turn them down, because despite a direct plea for help it turns out that our heroes - particularly Riker - are more concerned with keeping themselves unique than helping out a dying civilization.

I'm not sure why this plot point annoyed me so much, because it should be up to the individual as to whether or not they donate their DNA, and of course they should be free to turn the colonists down. I suppose what annoys me is that the episode clearly sides with Riker, and finds the idea of having yourself cloned in order to save a society of people to be morally repugnant - and I'm not 100% certain that it would be to these characters. When Riker and Pulaski's DNA is stolen anyway, and clones created in a lab, there is an opportunity for the episode to make a very bold and contentious allegory about abortion rights. It doesn't: Riker murders both his and Pulaski's clones with a phaser, and then Picard convinces the two colonies to shack up together and become polyamorous for the sake of genetic diversity. Brenna, Riker's one night stand, seems to be the only Irish colonist to object to being handed over as breeding stock - which is a sensible enough objection to make. Then she decides the second colony's Prime Minister is rather cute and moves on to chat him up instead. That's quite the fail in terms of writing strong women.

The puzzling thing about all of this is that it's written by Melinda M. Snodgrass, who wrote the exceptional "The Measure of a Man" earlier in the season. If her name wasn't in the credits you'd never guess it was by the same person. This episode is odd, weird, vaguely and gently offensive for multiple reasons and, in the end, not very good.

Cult TV fans might take note of Barry Ingham as Danilo Odell, the Irish colony's leader. He had previously appeared in the 1960s Doctor Who serial "The Myth Makers", making him one of a rare group of actors to have performed in both Doctor Who and Star Trek.
Posted by Grant at 7:44 AM