Star Trek: The Next Generation: "The Emissary" 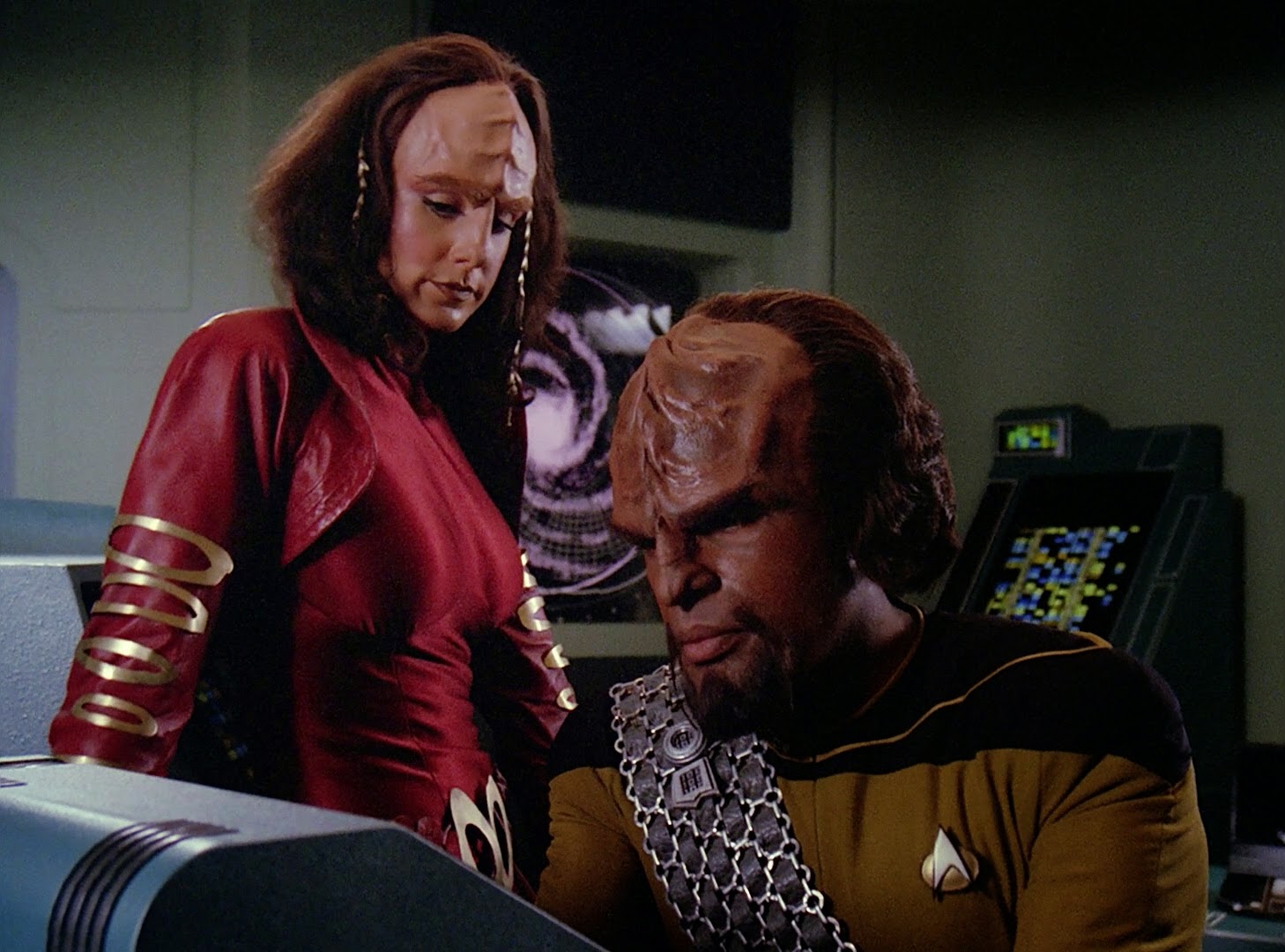 The Enterprise is sent on an emergency mission to intercept a 75 year-old Klingon sleeper ship whose crew will not know that the war with the Federation is long over. To negotiate with the Klingons, Starfleet sends a special emissary: the half-human, half-Klingon woman K'Ehleyr (Suzie Plakson), who has a troubled romantic past with Lieutenant Worf.

"The Emissary" is a bit of an odd episode, and I think it demonstrates a lot of the problems that episodes have had this season. It has a reasonably engaging premise with the Klingon sleeper ship, and it centres on a charismatic and likeable guest star with Suzie Plakson, but for some reason in the final product these elements simply don't gel together very well. A lot of time is spent on K'Ehleyr and Worf's romantic and sexual attraction, but it never really feels like time well spent, and the actual sleeper ship plot is given a cursory and simplistic treatment as a result. A rewrite or two could have easily fixed this problem, but I get the impression that the production team simply didn't have the time.

One thing this episode drives home is that Worf is a really conservative guy. He has sex with K'Ehleyr on the holodeck (I assume they have locks on these things, and some sanitation mechanism between bookings) and immediately demands they be married for life, since to have a one night stand or aggressive post-breakup sex is so utterly alien a concept to him. He's also remarkably sulky and blunt throughout the entire episode, which is a shame because earlier episodes like "The Dauphin" and "Up the Long Ladder" strongly suggested that he was actually a pretty romantic guy. I wanted to see the Worf who reads poetry for his lovers and makes them cups of tea. Instead I got unconvincing sword fights with holographic monsters and a lot of growling and surly recriminations.

K'Ehleyr, on the other hand, is a pretty funny and entertaining character. She's probably played a little too much like a sassy 1940s lead from a romantic comedy, but it's Plakson's first shot at the role and had they brought her back more often (she returns once more, in Season 4) that could have easily been toned down or refined. The character seems like a missed opportunity, and does the initial plan to keep Plakson in her "Shizoid Man" role of the Vulcan Dr Selar. Worf initiating a romance with a Vulcan medical officer sounds like a fantastic recipe for interesting interactions and character development. Worf reuniting with a former Klingon lover is just an escape for brooding and shouting.

As I've mentioned, the actual mission - to negotiate with the crew of a 75 year-old Klingon battleship who have just woken from cryogenic suspension - gets very little time to play out, and essentially relies on a fairly ridiculous ruse with Worf and K'Ehleyr wearing Klingon uniforms on the Enterprise bridge. It's a weak and lazy solution to an otherwise promising idea.

I did like K'Ehleyr, but the more I think about this episode the less I liked it. This was the 20th episode of Season 2. Eight of those episodes have been good, giving us a rolling score of 40%.
Posted by Grant at 8:05 PM