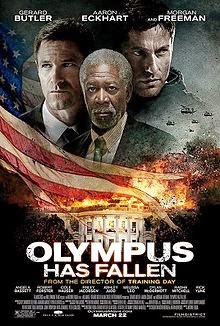 Terrorists have taken control of the White House. The President of the United States is taken hostage, and America's only hope lies in a former Presidential bodyguard who... and so on and so forth. Olympus Has Fallen is a masterpiece of derivative cinema. It leaves no stone unturned in its relentless 100-odd minute quest to showcase every cliche of the action genre. It is entirely unashamed of how ridiculously derivative it is. That actually makes it a rather enjoyable film: you know exactly what you're going to get from the outset, and within its very safe and predictable parameters it does not dissapoint.

Gerard Butler plays Secret Service agent Mike Banning who, 18 months earlier, failed to save the President's wife (a very brief appearance by Ashley Judd). Aaron Eckhart plays the President, Benjamin Asher, who's negotiating a response to North Korean aggression with the South Korean Prime Minister (Keong Sim). When Asher is taken hostage in his own White House, naturally it's down to Banning - who doesn't even work at the White House any more - to single-handedly take down terrorist mastermind Kang Yeonsak (Rick Yune) and his ridiculously large army of nameless goons and thugs.

Gerard Butler is one of those actors, like Colin Farrell, that Hollywood is constantly attempting to shove down the audience's throats. They've pushed him as an action hero, a musical star and a romantic lead, and no matter how hard they try to convince the masses (and despite Butler's talent) no one's bitten. The 1990s were a decade of expensive megastars, and actor-driven blockbusters. 21st century Hollywood is driven by concepts and brands: while no one has really stepped up to replace the likes of Arnold Schwarzenegger, Tom Cruise or Julia Roberts, to be honest no one has really needed to replace them.

Aaron Eckhart isn't quite as obvious a failing megastar as Butler, because he comes to Hollywood with a long career in independent cinema and theatre. I'm a big fan of Eckhart's work, and it's a bit of a shame that's he's wasted so badly here. Other classy stars that get waved past the camera without much to work with include Oscar winners Morgan Freeman and Melissa Leo, and Oscar nominees Robert Forster and Angela Bassett. You can fault Olympus Has Fallen for its derivative screenplay and by-the-numbers direction by Antoine Fuqua (Training Day), but you can't fault its casting director.

And of course the villains are North Korean: what else can they be these days? China's worth too much money to Hollywood to risk offending, and the Middle East got a lot less funny as a source of Hollywood terrorists once the planes hit the World Trade Center. While the rest of the world is quietly terrified of Russian aggression along the Ukrainian border, Hollywood must be collectively rubbing its hands with glee that its old boogeymen are getting back in on the action. I predict a sharp increase in Russian bad guys over the next 2-3 years.

I've talked a lot, but haven't said much about Olympus Has Fallen at all. That's telling: there's really not a lot to say about this movie. It doesn't trip over itself, it doesn't embarrass itself at parties. It is, however, an absolute cookie-cutter piece of fluff generating by a Californian movie assembly line. Everything's interchangeable. How they honestly think there's a story for a sequel (London Has Fallen, due next October) is beyond me.
Posted by Grant at 10:14 PM