Samurai Flamenco: "My Umbrella is Missing" 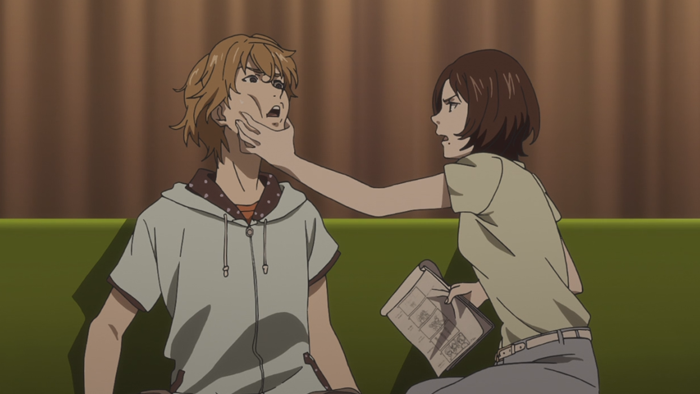 Professional model and wannabe superhero Masayoshi Hazama continues his secret quest to become a real-life superhero. He shouts at people for littering. He hassles a woman in the middle of the night over where she puts her recycling. For his sort-of-friend, police officer Hidenori Goto, Hazama's attempted heroics are nothing but trouble as public complaints about a masked local nuisance continue to increase.

This is a strong second episode that maintains the comedic tone of the first, while slowly expanding both the series' extended cast of characters and the depth of its two protagonists. Here we are introduced to Hazama's pushy, ultra-aggresive agent Sumi Ishihara and tokusatsu fan and up-and-coming pop singer Mari Maya.

Sumi is a bit of a cliche, perpetuating a comedic stereotype of the pushy, violent woman, and as a result I found her a little tiresome. Mari is also a bit of a cliche, I suppose, but her brief introduction suggests there might be more to her in the future episodes. There's also the fact that she and her band are in both the opening and closing title sequences. We'll just have to wait and see.

The episode's climax follows Hazama as Samurai Flamenco as he goes above and beyond to retrieve Goto's stolen umbrella. It hits all the right notes, and culminates in a scene very reminiscent of Mark Millar's Kick Ass, which I am gradually suspecting is more and more of a direct influence on the series. It's a lot nicer than Kick Ass though - at this stage, anyway - which makes for a much more likeable and breezy experience.

There's some very nice writing going on this episode that's subtle enough that most people won't even notice it. Hazama makes a big deal at the episode's beginning out of people putting their garbage onto the street at night rather than first thing in the morning: cats and birds will get to it and make a mess. 20 minutes later, and Samurai Flamenco is riding a bicycle at breakneck speed down a side street and smashes straight through several bags of garbage getting picked at by a cat. In a series like this, where the plot is rather slight, this sort of detail goes a long way.

I'm rather taken with this series, although I do wonder if they'll manage to sustain my interest for 22 episodes. For now it's a light-hearted and enjoyable distraction, and there's nothing wrong with that.
Posted by Grant at 9:13 AM