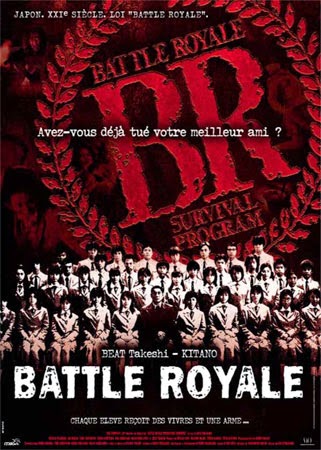 Battle Royale, released in Japan in 2000, is one hell of a movie. The premise goes something like this: in the near-future, Japan’s youth have become so violent and unruly that the government has passed the “Battle Royale” act. Once a year, a classroom of ninth grade students are kidnapped, dropped on an island and given an assortment of weapons. After three days, the one student left alive gets to go home. If more than one student lives the whole three days, then all of them die.

That's the basic gist of the plot. It brings to mind images of William Golding’s legendary Lord of the Flies, as a pack of children go violently mad once unobserved by the adult world, or Richard Connell's The Most Dangerous Game. Contemporary viewers will also immediately think of The Hunger Games, the widely acclaimed Suzanne Collins novel and its popular film adaptation, however I strongly suspect Collins was inspired by similar sources to Battle Royale rather than by Battle Royale itself.

What these images don’t sufficiently express however, is the sheer over-the-top violence and horror of the actual film. This is not your standard, everyday action flick, and it goes a long distance beyond anything seen in The Hunger Games (which is, by mainstream movie standards, pretty brutal). Battle Royale depicts forty confused teenagers killing each other one by one using automatic firearms, hatchets, crossbows, grenades and all manner of other weapons - both deadly and hilariously inoffensive. There is a lot of blood. Nothing is implied – it’s all shown to you right there on the screen.

Despite the apparent gratuitousness of the film, it’s actually a very clever and unexpectedly moving satire. It juggles a lot of different emotions – some parts of the film are horrific, others laugh-out-loud funny, others painfully heartfelt. It’s a virtuoso juggling act in terms of both writing and direction. The film is directed by the late Kinji Fukasaku, whose most famous film before this was his 1973 yakuza movie Battle Without Honor or Humanity. His son Kenta wrote the screenplay for him, as well as co-produced the film.

Battle Royale relies immeasurably on an incredibly strong teenage cast. It’s an exaggerated and graphic film based on what is to be fair a ridiculous premise. As a result, it needs a strong cast to sell it to the audience. The young stars have not failed in this regard. Tatsuya Fujiwara in particular is excellent as narrator/lead Shuya Nanahara. Popular comedian turned actor/director Takeshi Kitano is the only prominent adult in the film, playing an inexplicably motivated yet hilariously played school teacher in control of the unfolding massacre. Kitano is an exceptionally gifted performer, and Battle Royale shows off his comedy skills in a way those familiar with him through his dramatic works might not be aware of.

Strangely, Battle Royale took years to be distributed in the USA. Reports on why this is vary. Some say it’s because no American distributor would touch it for fear of a public outcry at the content. Others say Toei, the Japanese distributor, simply demanded too much money for the rights for anyone to bother. Whatever the reason it’s a deep shame – Battle Royale deserves as big an audience as it can get. An American remake was mooted for a while, spearheaded by Hollywood’s “go-to” guy for Asian remakes Roy Lee. Unsurprisingly, however, these plans have fallen by the wayside with no studio willing to take a risk on such controversial material.

Battle Royale’s numerous critics are correct in that it is an extremely violent and bloody movie. It’s also understandable that, in an era of high school shootings and mediatised urban violence, one might question the film’s taste and appropriateness. In answer to those fears I can only suggest that Battle Royale is – in the end and unexpectedly – a film produced in the most responsible of tastes. It horrifies us because it’s supposed to.

Certainly the issues surrounding the story seemed at the forefront of Fukasaku’s mind when making the film. Speaking to The Guardian in 2001 he noted that ‘teenage violence has become a major social problem in Japan in recent years, but the phenomenon is confusing to adults. In the past there was still violence but there were always reasons behind it, like poverty. These days it is more difficult to understand, and so they don't know what to do about it.'

Battle Royale doesn’t simply feel like a good film. It feels like an important one as well.
Posted by Grant at 9:05 AM