Weekly comics, and the worst idea of the New 52 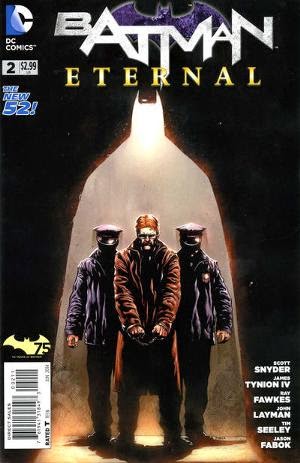 I was originally going to post this as a part of my Pull List weekly comics review, but then it got a little long and I figured it could become a post of its own. DC Comics are taking what could be seen as an extraordinary risk this year with the release of not one but three weekly comic book serials. We're already a month into Batman Eternal, and this week sees the debut of The New 52: Futures End, and there's still an Earth 2-related weekly to go (Worlds End).

Now you might think the risk comes in asking comic book readers to commit US$2.99 a week for each book. Buy any three monthlies from DC and you'll be paying between US$8.97 and US$11.97 per month. Buy Futures End, Batman Eternal and Worlds End and you'll be paying DC US$35.88 per month. That's a big financial commitment to just three stories, but that's still not the biggest problem. The problem comes at the store level.


Comic book shops generally aren't the guaranteed moneymakers that they used to be. They're generally operated by people who love the medium, not by those looking to make an enormous profit. Monthly orders are closely monitored to balance the needs of having enough copies of a book on the shelf and the need to avoid having excess stock left over. Once an issue's no longer the latest, it doesn't move anywhere near as well, and while an individual issue of Batman has a solid four weeks in which to sell out, an issue of Batman Eternal has just one week before its out of date. As a result, stores are going to order these books conservatively. Sales will be artificially pressed down.

Then there's the other problem of having four issues come out a month. If a book starts to lose momentum and shed readers, comic shops have enough time to adjust their order downwards in response. If the book is coming out four times a month, the store is having to predict its orders four times further into the run that they normally would. Again, the sensible thing to do is order conservatively.

And if the store order conservatively, it becomes harder for the casual reader to pick up a copy from the shelf, and with a weekly serialised narrative it rapidly becoming easier to drop a book than get further and further behind as you wait for your store to back-order those issues in for you.

That all makes for a pretty significant challenge. And DC is doing it three times simultaneously.
Posted by Grant at 11:15 PM