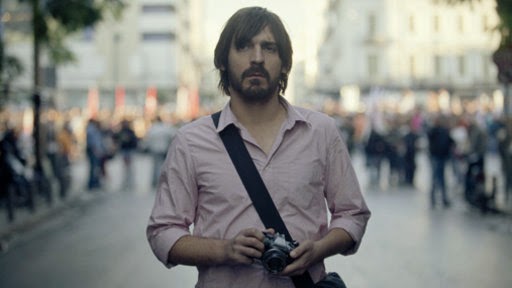 Dead Europe is an Australian drama by way of "Orpheus in the Underworld": a dark, oppressive, ruthlessly unpleasant odyssey for an Australian photographer travelling to Athens to scatter his father's ashes. It is a relentlessly grim and cruel vision of back streets and run-down apartment blocks, where criminals lurk around every corner and the entire continent seemed positively dripping with superstition and anti-Semitism.

The film is directed by Tony Krawitz, whose 2005 short feature Jewboy was pretty much that year's best Australian movie. It is adapted from the novel by Cristos Tsiolkas, whose works have already been adapted for the screen several times - most recently in the acclaimed TV drama The Slap. The film reunites Krawitz with his Jewboy star Ewen Leslie, an exceptional actor who really deserves to be a lot better known than he is. I adored Leslie's performance in Jewboy, and he was one of the few highlights of the Sydney Theatre Company's interminable The War of the Roses a few years back. Here he plays Isaac, a gay Greek-Australian photographer whose attempt to put his father to rest opens up some gaping wounds in his family history. Terrible things happen, and to an extent they only happen because Isaac keeps asking the questions no one wants him to ask.

The supporting cast are similarly great, particular Martin Csokas as Isaac's brother Nico, who lives in Budapest in a haze of drug addiction and prostitution. The film looks great as well, with the plot moving from Athens to Paris and finally to Budapest, each shot and lit in stark, savage fashion. I don't remember seeing a film with an aesthetic this impressively black since David Fincher's Seven.

There's also an interesting question over Dead Europe's genre. It boldly moves between realist drama and supernatural thriller, but deliberately walks a tightrope to avoid committing properly to either genre. The result is a film that's a piece of speculative fiction only if the viewer wants it to be. It could just as easily be an increasingly paranoid and jittery piece of realism. Krawitz keeps the film unexpectedly short as well. It doesn't feel truncated or rushed, but at the same time it feels odd to watch a drama like this that's less than 90 minutes long.

This is a particularly bleak vision of Europe, but intentionally so. Once again Tony Krawitz has directed the best Australian film of its year: complex, labyrinthine and memorable. It comes highly recommended.

I feel compelled to warn that this film contains quite a lot of anti-Semites saying appalling things about the Jews, as well as some very direct references to the Holocaust. Those who find such scenes difficult to sit through may want to skip Dead Europe altogether. It is important to note, however, that while many of the characters are anti-Semites, the film itself is by no means anti-Semitic. Quite the opposite, in fact. (Indeed, Tony Krawitz himself is Jewish.)
Posted by Grant at 9:26 AM