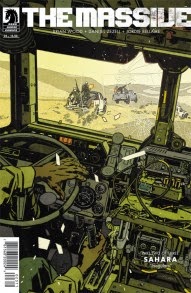 The Massive #23 was released this week, and that's as good an opportunity to talk about this post-apocalyptic ongoing comic by Brian Wood. Wood already has form with this sort of title, having created and written DC Vertigo's successful DMZ a few years back. The Massive is, I think, an even better comic, and certainly operates on a much larger scale than DMZ did. The book is set after a global series of ecological disasters - maybe natural, maybe not - that has left the world's populated decimated and scattered into a bunch of different, all equally desperate, communities. The survivors of an ecological terrorist group called Ninth Wave are travelled the world on their converted trawler ship the Kapital, while searching for the elusive sister ship the Massive - which went missing several years ago.

One of the things I really like about this title is the tight three-issue story arcs. Every three issues we move to a different part of the world, so as the series as gone on we've gained a better and better picture of what's happening. In recent months the book has taken a very unexpected turn, with hints that the amount of science fiction in the book is about to get much, much higher. The current arc is focused on Mary, one-time member of the Kapital crew who has jumped ship and now escorts an expedition to drive millions of litres of fresh water across the Sahara desert. There's also a very odd prologue scene in which Mary may be several centuries old - this comes after several earlier hints that she had a lot more to do with the Crash than she's let on.

Strong writing, gritty artwork, and a pile of great ideas. This is a brilliant SF comic, and - after struggling to grab my attention for its first year or so - it's become one of my absolute favourites. (5/5)

Jonah Hex and Tallulah Black have a bar room gunfight as a means of foreplay. It's so good to have this comic back where it was always at its best: telling strong western stories rich with pulp and archetype and occasional references to DC Universe history. It's just a pity that Gray and Palmiotti have returned to what works now that their silly time travelling shenanigans put the final nail in the book's coffin: it's cancelled as of August. This is in many respects a great pity, because via this as Jonah Hex before it they've written 101 consecutive monthly issues of Hex's adventures. I have my fingers crossed that DC will solicit a Jonah Hex #1 for October. In the back-up strip Madame 44 continues her otherworldly voyage. I'm not sure I like the idea of back-up strips enough to really comment on this. It's okay, I did read it, I just... eh. (3/5)

Here's an old superhero standard: two disparate superheroes meet for the first time, have a bit of a barney and then agree to join forces. In this case it's Aquaman meeting Swamp Thing. The concept is old and tired, but the execution is actually pretty well handled. Meanwhile some subplot gets intriguing advancements, including Mera walking into an obvious trap and evil scientists creating their own ominous genetically modified super-villain. I enjoyed this a lot. It's not outstanding, but Jeff Parker is writing a nice, entertaining superhero book and Pelletier and Parsons are giving it great artwork. (3/5)

Now that we're (I think) two issues out from the conclusion of "Zero Year", I'm appreciating the achievement more and more. This has been a massive storyline, taking in elements from the entire history of Batman and reconstructing it into something new and interesting - which is a pretty amazing achievement for a 75 year-old character. The Riddler has never felt more integral. Bruce Wayne has never been so three-dimensional. Plus Batman fights lions. You read that right: lions. You'll never guess who wins. Go on, really. Guess. You said "lions", didn't you. Wrong!! He's the goddamn Batman!! (5/5)

Batman's war against Carmine Falcone heats up. Meanwhile the new police commissioner's war on Batman heats up. This is a reasonably entertaining issue, but I'm already beginning to lose track of all of the details from previous issues. I think the writing team need to start re-focusing and clarifying the book soon, otherwise it's potentially going to slide spectacularly off the rails. Plus Stephanie Brown is back: I really wish they'd devote more time to her. (3/5)

This is a really odd comic. It's a flip book: one side is a crossover between Chew and Revival by the Chew creative team. The other is a crossover between Revival and Chew by the Revival creative team. Each team tells a different story, and they're told in the style of the respective comic books. The result is an interesting experiment, but I'm not entirely convinced it's anything beyond an entertaining distraction. It's certainly not a must-purchase for anyone bar completists of either book, since it sits completely outside of continuity for both titles. Personally I preferred the Revival side, but that's because I'm more of a Revival fan. (3/5)

Jordan and Scalera do a faultless job wrapping up this edgy, pulpy crime comic. This issue has action, character development and - most importantly - a satisfying resolution. I've spent much of my time reviewing this title praising Scalera's artwork, and it is fantastisc, but I do want to spend a moment to appreciate just how tightly written the book has been. The characters have been vividly drawn, the plot has rattled along and the action has been top-notch. Jordan is moving onto a post-apocalyptic ongoing title in a few months, and Scalera's already on Black Science, but I really do hope they reunite some time for another hard-edged pulp thriller like this one. Look for the graphic novel edition next month - it's worth it. (5/5)

This issue feels a bit messy: Barry Allen continues investigating super-crimes in the present day, while future Barry jumps back from the future to a little bit less in the future in order to stop the Mirror Master from accidentally killing a bunch of people. What is it with DC this year and doing time travel? Futures End is effectively doing the exact same storyline - hero travels from the future to... well, to the future, in order to stop something from happening. It's not very good. I was a really big fan of The Flash under Buccelatto and Manapul - the new creative team has a way to go if they want to maintain my interest. (2/5)

Everything this comic was already doing well it continues to do, and Antony Johnston piles some nice character development on top as well. This is a stunning blend of science fiction and police procedural, with interesting and non-traditional characters, a fast-moving plot and a wealth of neat ideas and crinkly bits of backstory and world building. The first story arc is building to a pretty stunning climax too, and I have no idea who the murderer is. At the same time, I feel like I should be able to work it out if I'm smart. This is simply brilliant stuff. (5/5)

I'm not sure there's a better moment in a comic this week than Kamala Khan, the new Ms Marvel, screwing up her face in frustration while trying to get a bullet out from the back of her pants. I'm being completely serious: four issues in and I am absolutely hooked on this character, who's goofily normal and down-to-earth, and her comic book. Her culture and religion are being used to inform character and give her a fresh context to what we usually see, and doesn't seem tokenistic or tacky. Her costume (which finally debuts in the story here) is appealing and sensible. The book's sense of humour is pitch-perfect. Adrian Alphona's artwork is a brilliant match for it as well: Kamala's facial expressions throughout the issue are one of its best parts. A lot of people have been clamouring for a Captain Marvel movie. Sod that: I want a Ms Marvel movie, stat. This stuff is brilliant. (5/5)

Dark Horse might be losing the Star Wars license, but they're going out on top. This miniseries is a stunning piece of work, showing what is shaping up to be a clever rebel mission against the Empire seen through the eyes of a group of new and untested recruits. Through their eyes we see the regular Star Wars cast from a fresh perspective: Han Solo last issue and Princess Leia here. Next issue it's Chewbacca's turn. It's very well paced and characterised, and Castiello and Parsons are doing some top-notch artwork that really captures the look of the actors. I'm really digging this book. Hopefully when Marvel take over in 2015 we'll get stuff of a similar calibre. (4/5)