Hercules: The Legendary Journeys: "Eye of the Beholder" 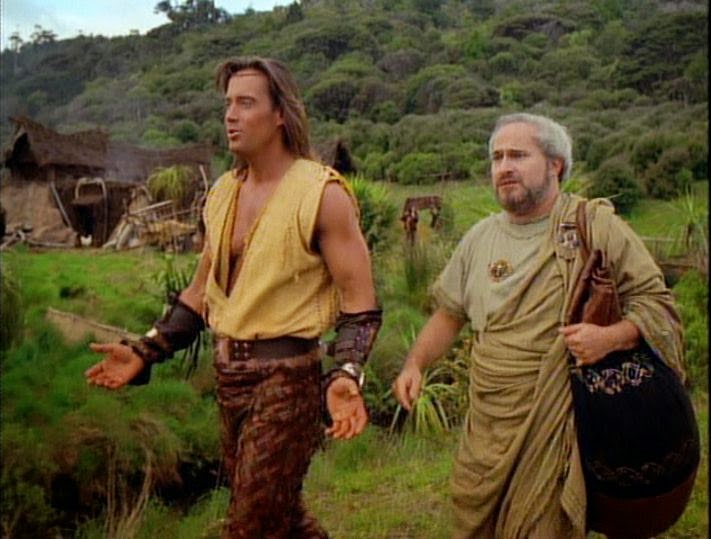 Hercules is on the run from the fifty daughters of King Thespeus when he hears about a cyclops terrorising a nearby village. Not only is the cyclops diverting water from the river to a nearby temple, he appears to be working for the Goddess Hera - Hercules' arch-nemesis.

This episode is, from beginning to end, ridiculously silly. The cyclops looks silly. The horde of amorous women hunting down Hercules are silly. The villain, a weird sort of Greek legendary punk named Castor, is particularly silly. Everybody overacts and mugs for the camera. Everything is foolish and over-the-top. Mind you, that's kind of the point.

It's all about self-awareness. Hercules: The Legendary Journeys is cheap, cheerful entertainment and it knows it. That self-awareness is centred on Kevin Sorbo's avuncular, relaxed performance as Hercules. He comes across as such a easygoing lead that it's difficult to get too frustrated at the series' limitations. After all, Hercules doesn't care - why should we? This creates a problem for the reviewer: either we go with Herc and take a happy, relaxed, 'anything goes' attitude to the series' relative merits, or we try to stay starkly scientific about things and admit that - all things considered - Hercules: The Legendary Journeys is pretty terrible.

I think I'm going to have to take a middle road with this one: I fully acknowledge that the fun of the show is in its cheap and cheerful demeanour, but at the same time there are certain things within that framework that I simply can't excuse. Plots need to make sense. Characters need to be interesting, even if they're broadly drawn. Visual and special effects can be cheaply done and fake as hell, so long as they're presented with integrity.

All of that in mind, and I'm pretty sure "Eye of the Beholder" is a pretty awful hour of television. Throwaway it may be, but there are better throwaway episodes out there. Everybody is mugging just a little too much, and the episode as a whole fails to hold together. More than once I got a little bored, which is pretty much the one cardinal sin of a series such as this.

Robert Trebor is back - he played Waylin the slave in Hercules and the Lost Kingdom, but while the personality of his character is broadly identical he's now playing the disreputable merchant Salmoneus. He'll be back in a bunch of Hercules and Xena episodes. I never warmed to the character myself - certainly he didn't change my opinion here.