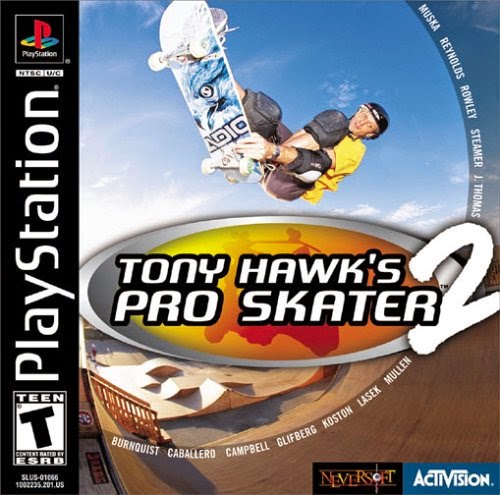 I'm not really into skateboarding. I never owned a skateboard and am generally too risk-averse to try balancing on one now. I am, however, really into videogames, and that - it turns out - allowed me to enjoy Tony Hawk Pro-Skater 2 immensely.

This wasn't an exclusive PlayStation title by any means, but certainly I played it on the PSX. I played it a lot. This is one of those cases where the initial game out and was broadly enjoyable, but whose sequel made just enough minor tweaks and changes that it creates a vastly more enjoyable experience. It was addictive and entertaining and, as a result, one of my favourite PSX titles.

You control a skateboarder as you run through a variety of skate parks and locations, using a combination of buttons on the controller to perform various stunts. Different stunts score different numbers of points. Each location is also filled with collectible items, secret areas and other items all designed to sustain player interest. It's an exceptionally well balanced game: learning how to skate around and perform basic stunts is remarkably simple, while collecting all of the items and completing all of the levels takes skill and practice. All up it's just a slickly made, wonderfully playable sports title.

The game kicked off something of a trend in licensed 'extreme sports' videogames, including Matt Hoffman's Pro BMX, Shaun Palmer's Pro Snowboarder and Kelly Slater's Pro Surfer. None of them were as good as the original franchise, which demonstrated remarkable long-term appeal with a total of nine core games and seven spin-offs between 1999 and 2012.
Posted by Grant at 10:54 PM