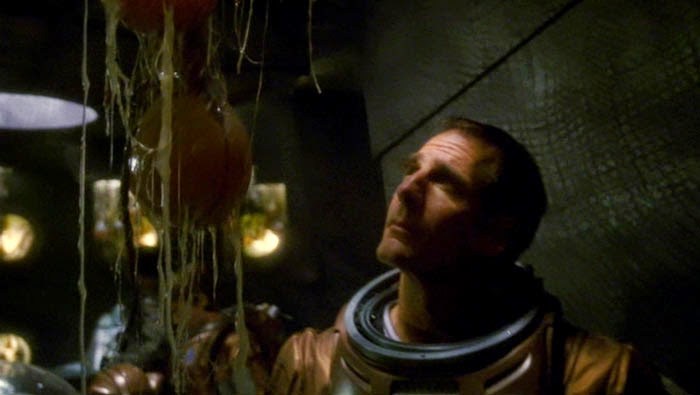 The Enterprise's journey to Azati Prime is interrupted by the discovery of a crashed Xindi spacecraft on a nearby planet. When the away team discovers a hatchery of unborn insectoid Xindi, Captain Archer orders for the eggs to be saved at all costs - even at the expense of the Enterprise's mission. When Archer's order become too much, the crew break against his orders and start a mutiny.

Oh for goodness sake get to Azati Prime already. This is the third full episode since the Enterprise's crew learned of the location of the Xindi weapon and we still haven't reached it yet. It all feels like a delaying tactic and it's getting tiresome. This episode also feels quite tedious to watch because the suspense is a false suspense. We know that Captain Archer is acting irrationally, so we know there has to be a reason for it. The result is an episode that's less about trying to work out what's going on so much as it's about wanting it all to end.

About five minutes in Archer gets sprayed in the face by an alien pathogen, so the fact that he immediately starts behaving irrationally and giving unbelievable orders should have been as much of a clue to his crew as it was to the audience. Multiple crew members do question him, starting with T'Pol, and even after he's relieved several of them and confined them to their quarters the rest of his staff seem oddly credulous. Major Hayes (Steven Culp) seems particularly naive: he not only obeys Archer's authority, he defends the captain even when his actions are putting the entire fate of the human race at risk.

I really wish Enterprise was better than this: I like most of the cast, and despite initial misgivings I really like the setting and the way it works as a prequel, but this season-long arc is really exhausting to get through and I'm watching the episodes with less and less enthusiasm. Please let them get to Azati Prime next week. Given the episode is title "Azati Prime", I'm hopeful.