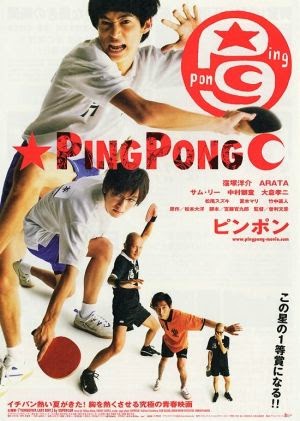 Ping Pong is an oddity. It is a teen comedy about a table tennis championship, based on the popular manga by Taiyo Matsumoto. It has a strange, off-kilter tone. Its table tennis matches are shot like The Matrix. It is without question unlike any sports-based movie I have ever seen, and it is all the better for it. I’m not sure how many table tennis movies are out there, but I’m reasonable comfortable in asserting Ping Pong is one the best that’s been made.

Best friends Pico (Kubozuka) and Smile (Arata) are both members of a high school table tennis club, whose lives get thrown into disarray by the arrival of a new player at the school – one who is vastly more talented at the game than Pico, and whose presence challenges Smile to stop coasting through life and to start making a difference.

The first thing to commend is just how freakishly accurate the film’s cast are to their manga counterparts. Ping Pong is perfectly cast, with each character visually corresponding precisely to how they look on the page. I don’t think there’s ever been a comic-to-film adaptation with such fidelity.

The highly dynamic table tennis matches are another highlight of the film, using computer graphics, manga-style framing and great editing. This is an over-the-top, ridiculous movie, and director Fumihiko Sori has wisely shot and edited this in an appropriately over-the-top and ridiculous way. Ping Pong marked Sori’s directorial debut, and he received a Best Director nomination for it from the Japanese Academy. He has since made a bunch of other films, including the CGI anime Vexille, the boxing drama Tomorrow's Joe and the Zatoichi spin-off Ichi.

The cast is an interesting one for fans of anime and manga. Yosuke Kubozuka is a former model who shot to fame as one of the stars of the live-action TV adaptation of GTO. Arata (full name Arata Iura) has since appeared in a bunch of Japanese films, notably the 20th Century Boys franchise – another manga adaptation. Shido Nakamura, who won a Best Newcomer award for his performance here, has gone on to appear in the likes of Letters from Iwo Jima, Red Cliff and the anime Stormy Night. Mari Nutsaki is the voice of Yubaba in Spirited Away, and has provided voice work on the videogame Metal Gear Solid 4. Naoto Takenaka is the Japanese voice of Puss in Boots in Dreamworks’ Shrek franchise.

If you’re after a good sports movie, a quirky comedy, a manga adaptation or just a unique film experience, it’s a good bet Ping Pong will leave you satisfied. This film is one of a kind.
Posted by Grant at 11:28 PM