Books of May: Salamander, by Thomas Wharton (2001) 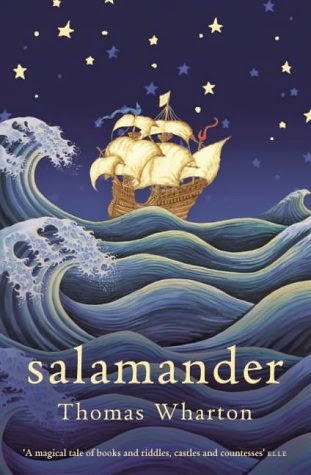 An 18th century London book printer, Nicholas Flood, is drawn to a castle on the Transylvanian-Hungarian border. There he is tasked with creating an eternal book for the grief-stricken Count Ostrov. As the story unfolds, Flood's adventure incorporates clockwork automata, imprisonment, escape, and an epic journey around the world in search of the finest components with which to manufacture the perfect book.

The whole adventure is told in lyrical, dream-like fashion by its author, Canadian Thomas Wharton. I'm not certain what drew me to pick this book up about a decade ago. I suppose the blurb on the inside of the dust jacket sounded interesting. What I do know is that Salamander knocked me sideways: it's a stunning work of fantasy, and one that the traditional fantasy crowd seemed to ignore entirely because of how it was packaged and marketed.

It's genre fiction by stealth: in books they call it 'literature', and in cinema it's called 'arthouse', but in both cases it's the same thing.

There is a stigma to fantasy and science fiction. It makes them seem cheap and coarse, and a whole section of the market won't tolerate the thought of reading or viewing them. Packaged differently, however, and provided their content is a little gentle - or, at least, avoids giveaways like dragons, elves, laser guns and spaceships - entire works can be smuggled into the literatii's collective hands without any of them realising what they're actually enjoying.

There's a downside to this, of course, and it's that the other half of the work's potential market - people who don't have a problem with openly reading fantasy fiction - often don't even know these kinds of books exist. I think the situation is changing, mainly because as readers and critics we can disseminate information much more easily via social media, blogs and podcasts, but there's still that gap where some authors are claimed as genre writers and some are not.

I found Salamander to be a stunning fantasy novel. It remained me a lot of Mervyn Peake, who had a similar love for grotesque characters and stunning turns of phrase. Unlike a lot of novels it has stuck with me, rolling over in my brain from time to time. It's clever, and it's beautiful, and it's fantasy - even if the only place you could buy it was from the literature section.
Posted by Grant at 11:42 PM

Email ThisBlogThis!Share to TwitterShare to FacebookShare to Pinterest
Labels: books, Books of May, Canada, fantasy, reviews