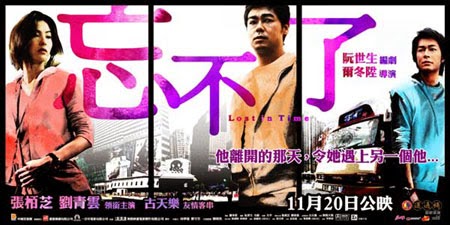 Cecilia Cheung plays Siu Wai, a young woman engaged to minibus driver Ah Man (Louis Koo). When Man is killed in an accident, she takes over his bus route in an attempt to support his five year-old son. She soon befriends Dai Fai (Lau Ching Wan), a veteran minibus operator who helps to show her the ropes of a difficult and cut-throat industry.

Minibuses are such a wonderfully Hong Kong-centric thing that they give Lost in Time a very unique setting and flavour. The film works this to its advantage, creating a film that you really couldn’t easily adapt or remake in many other places. I think you’d lose something if you tried. This is the kind of Asian film I enjoy – not simply a well-crafted movie but one that is culture and site-specific. You’re simply not going to get this story out of Hollywood. Cecilia Cheung and Lau Ching Wan are both excellent – Cheung actually won the 2004 Hong Kong Film Award for Best Actress for this performance, and it was well deserved.

Lau Ching Wan is, I think, one of Hong Kong’s most consistent and underrated performers (indeed I showcased his work in a Five Films post a while back). It’s sad he isn’t as big a name outside of his own industry. Louis Koo, who is rapidly becoming quite popular outside of the Chinese-language market, isn’t really in the film that much. He’s labelled here as a “special guest star”, a term usually reserved for TV shows.

There are some standout scenes and sequences in the film, mostly in its first half. One early scene features the worst-timed telephone call I can remember seeing, turning a scene from a sad moment into an awful “can’t look” tragedy. As the film progresses it increasingly begins to rely on cliché and stereotype, which is unfortunate. For all its overwrought moments there’s something very good on screen scratching to break free.

And of course, as I have mentioned, the film is saddled with some unfortunate cultural assumptions. It’s one thing to make a film about a young woman striving against the odds to prove herself in a male industry, or to struggle against adversity to make it on her own. It’s another thing entirely to tell that story from the clear assumption that without a man to help her, she clearly can’t actually manage it. It feels unpleasant at times, and while having Siu Wai succeed entirely on her own might make for a more predictable story, in this case I suspect it would have made for a more satisfying one.

Director Derek Yee has progressed from Lost in Time to direct dramatic hits such as One Night in Mongkok (2004) and Shinjuku Incident (2009). This film has a distinctly different style and pace.
Posted by Grant at 7:41 AM