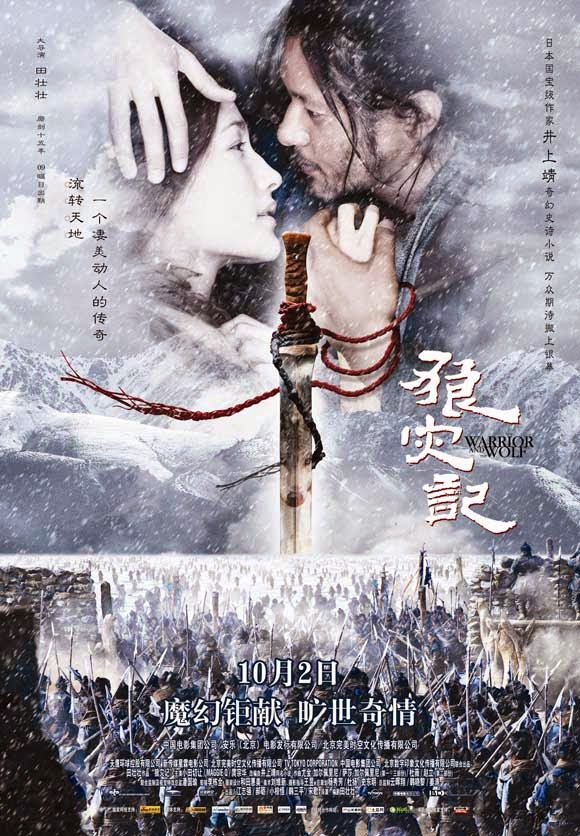 The Warrior and the Wolf is without question a very beautiful film. Shot on location in China’s Xinjiang Autonomous Region, it showcases that region’s stark, mountainous terrain to remarkable effect. Sadly the lush visuals and the talented cast are unable to rescue a film that suffers from a confused and unlikeable screenplay. Worse than that, The Warrior and the Wolf is dull. If you find yourself checking your watch throughout the film to see how much longer it has to go, you know you’re not watching a masterpiece of modern cinema.

The film is set in ancient China. Joe Odagiri plays Lu, a cowardly shepherd dragged into the Chinese army by General Zhang (Tou Chung-hua). Despite attempting to flee the army several times, Lu ultimately saves Zhang’s life after a battle goes awry. When the wounded Zhang is taken home to recover from his wounds, Lu is placed in charge of his unit and camps out in a deserted village. There he encounters and begins a passionate love affair with an unnamed tribeswoman (Maggie Q), who holds an unsettling connection with the wolves that roam the surrounding forests.

This film may be upsetting for some, as it begins with representations of sexual assault.

It is understandably next to impossible to generate a sympathetic love affair that begins with a man repeatedly sexually assaulting a woman. The acts immediately make Lu a deeply unpleasant protagonist, and it makes the ensuing love affair hollow and hard to swallow. There is an obvious attempt in this film to demonstrate the cruelty and the beast-like potential nature of human beings, but it is never given the opportunity to be properly or elegantly expressed. The result is a film that is clumsy: clumsy in tone, in narrative and absolutely in terms of theme and character.

The film’s narrative structure is unnecessarily messy. A series of flashbacks in the first half hour are very poorly signposted, making it a very difficult and bewildering experience. By the time the viewer has a handle on what is going on, they are more than a third into the movie, and from then on in very little else actually happens. The film does suddenly veer into some strong elements of supernatural fantasy and horror, but they are expressed in fits and starts and don’t ultimately lead to much. One visual effects showcase involves a sandstorm across a desert composed entirely of wolves, a scene that feels completely out of place here but would fit quite snugly into one of the Mummy films.

Maggie Q does very little in the film, since the screenplay only requires her to say the occasional foreboding threat and have a lot of sex. The role was originally set for Tang Wei (Crossing Hennessy), but after she was briefly blacklisted by the Chinese government for her participation in Lust, Caution she dropped out of the running. Her loss is, I suspect, her career’s gain – The Warrior and the Wolf isn’t a film any actor should want on their resume.

There is vast potential in the film’s story and ideas, but that potential is quite simply never realised. Not fully, not even partially. Its director, Tian Zhuangzhuang, has demonstrated a strong talent through such films as The Horse Thief (named the best film of the 1990s by Martin Scorsese) and Springtime in a Small Town. It seems his talents have failed him here. The Warrior and the Wolf is a massive disappointment.
Posted by Grant at 9:34 AM