Star Trek: The Next Generation: "The Measure of a Man" 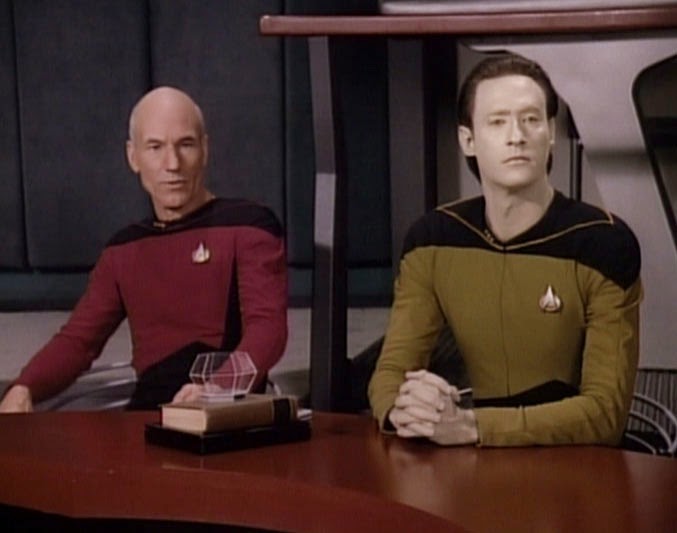 The Enteprise docks at Starbase 173 for routine maintenance. While there Starfleet's leading cyberneticist Dr Bruce Maddox arrives on the ship to meet with Commander Data. He seems keen to learn how Data's creator, Dr Noonien Soong, overcome the numerous challenges in developing a working artificial intelligence. When Data refuses to participate in Maddox's experiments - which would involve dismantling him and temporarily erasing his memory - Maddox has him transferred to from the Enterprise. When Data quits Starfleet service, Maddox goes a step further and tries to have Data legally defined as Starfleet's property.

"The Measure of a Man" is a pure and simple courtroom drama. Due to staff shortages on Starbase 173 Commander Riker is unwillingly shanghaid into defending Dr Maddox's claims in court. This leads to a bizarre situation, with Riker and Picard debating one another in court over whether or not Data is an independent sentient being. Sure, it's a talky episode, but it's intelligent talk. It has personal friendships at stake. Crucially, it refuses to paint Maddox as a villain, and instead takes the more complicated route of portraying him as a dedicated scientist with good intentions.

This episode also accentuates the sort of cameraderie among the regular cast that I noticed in "A Matter of Honor". Crucially, this is the first of several Next Generation episodes to show the command crew playing poker in their downtime. They're no longer colleagues who work together: they're close friends as well. This sort of bond between them is critical in an episode such as this, because it drives Riker's conflict throughout the second half: he's duty bound by law to argue that one of his closest friends doesn't have rights.

Court scenes aside, the episode is a string of wonderfully constructed conversations. Picard has several with Captain Louvois, the Starfleet JAG officer who tried to court martial him for the loss of the USS Stargazer. He has another with Guinan that's simply beautiful: Patrick Stewart and Whoopi Goldberg are both exceptional actors in a deliberately understated, moving conversation in Ten Forward. Even seemingly throwaway scenes, such as Maddox coming to visit Data in his quarters, are perfectly pitched: Maddox doesn't even think to knock, or ask permission to touch Data's things. Why would he? His behaviour as much as his dialogue expresses how little respect he actually shows Data as a person.

The script is the work of Melinda M. Snodgrass, a story editor on the series during its second and third season. It really is the best thing any writer has turned in to the series since it started. She's written for a number of TV shows - SeaQuest DSV, Odyssey 5, Profiler, The Outer Limits - but I think this episode is definitely her masterpiece.

This is what Star Trek: The Next Generation should have been from the very beginning: intelligent, emotive drama where believable and richly drawn characters star in stories that tell us about the far future, when really interrogating what it is to be in the world now. It's great science fiction, and gets my strongest possible recommendation.

Four good episodes out of nine brings the Season 2 total up to 44%.

(I've been told that the bluray edition of Season 2 features an extended edition of this episode, with an additional 16 minutes of footage added. I haven't seen it, but am very keen to do so.)
Posted by Grant at 7:43 PM