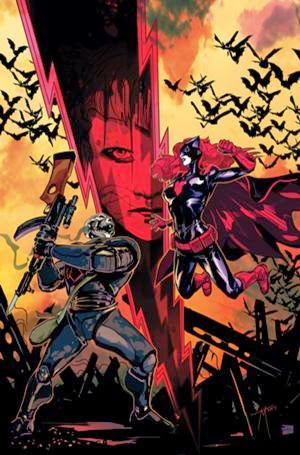 One of DC's more egregious cock-ups of recent times has been the way they mishandled their relationship with Batwoman's creative team, forcing them to acrimoniously quit the book with one issue to go in a 25-issue epic story arc. Williams and Blackman were willing to create that last issue, indeed I believe they were contracted to do so, but DC editorial in their infinite wisdom turfed the team and left new writer Marc Andreyko to pick up the pieces with an all-new story arc. What happened at the end of Batwoman's fight against Director Bones and the DEO? Did she unmask Batman? Was her sister rescued? We'd never know.

Now months after the fact (six, to be precise) DC is wrapping up the Batwoman vs Batman storyline with this extra-length annual written by Andreyko and featuring art by Trevor McCarthy and All-Star Western's Moritat. God knows where this issue will be collected - DC have already published the fourth and final volume of the Williams/Blackman run, which now ends on a cliffhanger.

This conclusion is an odd read, because we already know who makes it out and who doesn't, because we read the next issue (chronologically speaking) half a year ago. The script is serviceable in terms of providing an ending, but it's certainly not a very good one. A few weird curveballs run perilously close to making a mockery of the entire arc. The whole book feels rushed: the panel-per-page count is remarkably low, and its taken two artists to get the job done. It may give readers an ending, but it sure as hell doesn't provide value for money (it comes with a $4.99 price tag, making it the most expensive issue of Batwoman ever by a full two dollars).

I appreciate that DC's come back and actually provided an ending, but I can't shake the feeling that they couldn't have mishandled the ending more if they tried. (2/5)

Under the cut: reviews of Batgirl, Black Science, The Flash, Silver Surfer, Star Wars: Rebel Heist and Umbral. I somehow failed to grab Batman Eternal so hopefully will pick up a copy in the next week.

This is a knockout of a comic. Gail Simone takes the "annual" part of the second Batgirl annual and actually makes it a key aspect of the story: a takedown of a criminal enterprise, aided and antagonised in turn by Poison Ivy - whose personality and demeanour changes as the plants do, season to season. It's a genius idea, and makes for an absolutely stunning comic that's clever, action-packed and emotive. I'm always somewhat skeptical of annuals, since they often cost a lot more money for a pretty shaky story, but this one was top-notch. (5/5)

I mentioned last week how Matteo Scalera's artwork is making anything he draws close to a must-buy. That's just as much the case with Black Science as it was with Dead Body Road. The first story arc hits its climax here, in a manner that's action-packed (basically the whole issue is a chase sequence), smartly written and quite surprising. I've heard people at my local comic shop (LCS) complain that none of the characters in this book are likeable - I disagree. I think they're definitely very flawed people, but their flaws are what makes them interesting. I can't wait for this book to return in July. In the meantime, keep an eye out for the first trade paperback: this is a really good comic. (5/5)

They seem to have a fairly dodgy scheme with the Flash annuals where they basically use it as an opportunity to squeeze in an extra issue of the ongoing storyline: you're effectively obliged to buy the annual because it contains significant plot information. This is a case in point, continuing the new time travel storyline from a few weeks ago and actually explaining what the hell is going on. Future Barry Allen is travelling back in time to save Wally West, now introduced into the New 52 as an African American. I like the new Wally - any diversity is good in comics - but this annual is hampered by some very sub-par artwork by Ron Frenz in the present-day sections. Brett Booth's future sections are much more readable. (3/5)

Dan Slott has been very open about his desire to re-imagine the Silver Surfer as Marvel's equivalent to Doctor Who, and he certainly achieves that here. We've got a powerful hero more interested in negotiating peace than fighting a battle, and a plucky and resourceful human companion who has adapted brilliantly to life out in the universe. Mike Allred's art is a perfect match for this kind of whimsical, way-out sci-fi adventure as well - I hope he sticks around for a while, and not just the first storyline. This may be replacing Daredevil as my favourite Marvel monthly. It's faultless. (5/5)

I wasn't going to go past this: a four-issue Han Solo-centric miniseries written by the talented Matt Kindt. The first issue didn't disappoint. He has the characterisation down perfectly, he's telling an exciting story in a very interesting way, and Marco Castiello and Dan Parsons provide some great dynamic artwork. As this is a first issue, it's pretty much all set-up, but I've been left very keen to see what's going to happen next, and indeed what's going on at all. The title seems a bit of a giveaway: what is the titular heist, and how are they going to achieve it? (4/5)

Umbral continues to deliver this month, with some nice fantasy adventure and a healthy dose of horror at the same time. There's a nice magic-versus-science thread woven in here, which I think is going to pay off very handsomely in future story arcs. There's one scene in this issue I adored in particular, which I don't particular wish to spoil - but it was a wonderfully macabre moment of horror. This concludes the first story arc so, like Black Science, this book is off until July. A trade paperback will be released in the meantime, and I strongly recommend you give it a read. (4/5)
Winner of the Week: It's a strong week, but Silver Surfer easily came out on top.
Loser of the Week: Batwoman. Too little, too late - DC really dropped the ball with this.
Posted by Grant at 9:38 AM