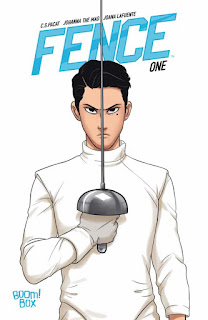 Nicholas Cox is an enthused teen fencer, one desperate to win a regional championship. In his first round, however, he finds himself facing top-level fencer Seiji Katawama - does he even stand a chance?

You know all of those manga and anime based around sports, with a plucky teen protagonist slowly learning how to be the best in their particular pursuit? Meanwhile they make friends and establish relationships with a wide variety of supporting characters? That's Fence: it really is a sports manga in an American comic book format.

That's both good and bad. It's nice to see this genre get a decent shot in the English-language market, but at the same time it's a comparatively expensive way to experience this sort of a story: a manga might be in black and white, but it's going to give you a lot of pages for comparatively little money. While the writing and character work here is solid, and the art clean and very easy on the eye, it's really going to come down to how much you love this genre to buy it every month. (3/5)

Batwoman and Colony Prime are stuck in a fantastical illusion, thanks to the Scarecrow's latest fear toxin. There is a big problem with Batwoman, and no matter who writes her it never goes away: she's trapped by her past. Some days it seems like every story involving the character focuses on her relationship with her father, her past sins, her sister, or any other elements of her tortured, miserable back story. Some times you just want to see a character look to the future instead. (3/5)

While Vader is tasked with tracking down an elusive Jedi survivor, that Jedi has already travelled to Coruscant to retrieve a hidden object from the abandoned Jedi Temple. This series is certainly improving a lot since its initial issues. Darth Vader works much better as an already-confident, terrifying villain than as a young rookie learning the bad guy ropes, and after one story arc about the latter we're thankfully getting a lot more of the former. Fingers crossed the series continues to be this good. (4/5)

Stephen Strange has been replaced as Sorcerer Supreme by Loki of Asgard, and right there is why I'm already struggling with this new story arc. It's not that I dislike Loki - he's a fine character - it's that I want to read a Doctor Strange comic that focuses on Doctor Strange. This feels like a crass attempt to grab the attention of readers, rather than actually be a well-developed and interesting storyline. The dialogue works, the art by Walta seems solid, and I'm always a fan of Jordie Bellaire - it's just all in service of a story I'm not interested in reading. (3/5)

Giant robots face off against giant monsters in what was originally intended to be a miniseries finale. With Mech Cadet Yu promoted to ongoing status, issue 4 instead forms as a set-up for the series going forward. It's a great issue , with some really dramatic and inventive action in the middle. It's easy to see how this series can move forwards as an ongoing title because it's such an easy set-up: aliens invading the Earth, and a crew of young cadets in giant robots fighting them off. Good writing, good artwork: if it works for Neon Genesis Evangelion and Pacific Rim, it's going to work for readers here. (4/5)
Posted by Grant at 10:17 PM