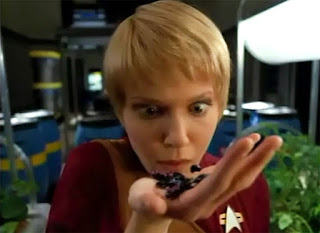 It is 18 September 1995, and time for another episode of Star Trek: Voyager.

When Voyager encounters a school of alien creatures in deep space, the crew are keen to investigate. The creatures then surround and trap the ship. Their emanations have an unexpected effect on Kes (Jennifer Lien), accelerating her development and forcing her into her 'elogium'; the brief period of time in which her species may conceive a child.

We need to talk about Neelix and Kes. They were introduced to the series as a romantic couple in the very first episode, "Caretaker". It is not a relationship that sits well with me, and it never has. A lot is made in the series about how Kes is two years old, and from a species with a life-span of  nine years. Neelix's age is never referenced in the series, although we know he was an adult at least 15 years prior to meeting the Voyager crew. It seems safe to assume he is at least in his mid-30s (Ethan Phillips, who plays Neelix, was 40 when the series premiered). In the end, it is difficult to see Kes and Neelix's relationship as being anything other than one between an adult and a child.

Now sure, you can argue it away by suggesting that the Ocampa (Kes' people) clearly mature very quickly, and somehow a two year-old is already of an equivalent physical and emotional maturity to a non-Ocampan adult. This still does not sit well, partly because with something like this you really don't want to be in a position where you have to argue it away, and partly because "Elogium" is an episode specifically about Kes reaching sexual maturity. What's worse, she explains inside the episode that this process - the 'elogium' of the title - has come early. In other words, she is not yet sexually mature. It feels like a tacit admission by the series that Neelix is, for all intents and purposes, dating a minor.

That makes the entire thing hugely problematic for me, and easily my least favourite part of Star Trek: Voyager. It is a problem made worse in this episode, as Neelix continues to express petty jealousy at Kes associating with Tom Paris (Robert Duncan McNeill)  and tries to control her behaviour despite her own wishes. On top of that, when it becomes clear that the alien organisms have kicked Kes' reproductive cycle into gear - she must mate within two days if she ever wants a baby - the episode spends more time on Neelix's reluctance to be a father than Kes' own struggle to decide about having a baby at all. Add in some awkward sexual harassment on the bridge between Janeway (Kate Mulgrew) and Chakotay (Robert Beltran) and you have a pretty disgusting nightmare going on.

This is a straight-up terrible episode of Star Trek. It purports to be about Kes but largely sidelines her from her own crisis. It takes much of its time focusing on the series' least enjoyable character, and even when it hits on a decent scene - Tuvok (Tim Russ) discussing fatherhood is actually rather wonderful - it is done in aid of a dreadful purpose.

Season 2 of Voyager has managed one good episode out of far thus far. That's a dreadful kick-off to its second year. The quality ratio drops to 25 per cent.
Posted by Grant at 1:18 PM