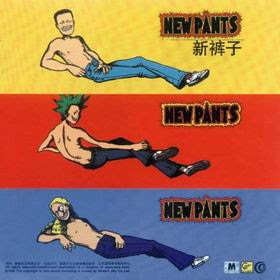 A few years ago I stumbled upon a CD by a Chinese post-punk band named New Pants. I bought it on a whim and absolutely loved its blend of Ramones-esque fast punk and breezy electronica. I've enjoyed what I've heard of the band ever since, but recently I managed to track down a copy of their original 1998 self-titled album. It is a chance to hear the band in their early stages.

It's a slightly strange experience, since it almost sounds as if the tracks were laid onto the album in the chronological order in which they were written. It certainly ends with a fairly similar sound to the one with which I'm familiar, but it begins somewhere quite different. In truth it begins with them sounding like a straight-up Ramones tribute act.

There is a lot of energy to burn in that first track "I'm OK". It's short and packed with Ramones-style guitar riffs. It almost sounds like it comes from Mach Pelican, an Australian-based Japanese punk band of the mid-1990s that really was just an extended Ramones tribute act. That style follows with less impact in the second track, "Our Time", and the seems to have even less impact in the third, "Hey! You".

That suddenly shifts on "New Love", which is the first song on the album to include synthesisers alongside the guitars. It has a little more if its own identity as well, forming what strikes me as a stronger "Chinese" sound. That is contrasted sharply by "I Do Not Want to Lose You", which utilises an easy-going rhythm and a much simpler arrangement. The song works better by being such a direct contrast. From there the album bounces back to straight punk in "Love Tear Gas" (which has a great and surprising use of saxophone) and "You Are My Ramones" (a bit of a giveaway).

"Love" brings a strong bassline, while "Do Not Tell Me That I Lost, Baby" with its 1980s-style synths really brings out the New Pants that I knew. It takes them nine songs, but they finally hit upon their winning formula. It's followed up by the thumping anthem "Every Day", the rather underwhelming "I Am a Waiter", and the rougher and distorted "Come and Go".

"Monkey" has a playful, almost ska-like style to it that presents another contrast, while "Outdated" returns to the simpler charms of "I Do Not Want to Lose You". The album concludes, rather bizarrely, with a straight techno track titled "New Pants (Mix)".

"New Pants" is a much less consistent album than the band's subsequent work, and as such it's not as easy to recommend. For anybody who already enjoys that later music, however, it is an interesting dive into how the band assembled its signature style and sound. One perhaps for the die-hards only.