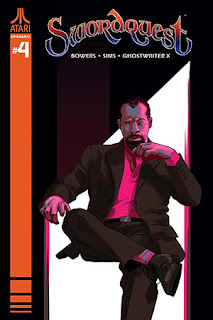 Four issues in, and Swordquest is really firming up as one of the most surprisingly good comic book miniseries of 2017. I find myself how things possibly worked out as well as they did. Dynamite, a publisher mainly responsible for remakes of old pulp characters like John Carter of Mars and Vampirella, picked up the rights to make comic books out of Atari videogames. I expected fairly tedious attempts to expand 8-bit arcade games into science fiction narratives. I didn't expect Swordquest.

Writers Chad Bowers and Chris Sims did the cleverest thing by noticing that the most interesting aspect of Swordquest was its real-life background. A four-game series, in which players who completed each game and solved its puzzles, could write into Atari and register for a special event. The best player at each game's event would win a special game-related prize. The final prize - a sword - was never given away, because Atari essentially collapsed before it could be awarded. It is that weird set-up and downfall that is powering this series, as a terminal ill ex-games player works to steal the never-awarded sword from a retro games expo. This issue things get a little weird, in the best possible fashion. The pseudonymous Ghostwriter X illustrates the book beautifully, with a very grounded, thickly inked style that add to its sense of real world, small-scale criminality.

That this series is not only readable but genuinely great is possibly the biggest surprise of my comic-reading year. (5/5)

With magic still in desperately short supply, Strange and his new apprentice Zelma descend into the disused subway tunnels of New York City to rediscover a long-lost ancient temple - and uncover a ghostly threat waiting in hiding. New creative team John Barber and Niko Henrichon are doing a solid job with Doctor Strange, picking up the threads from Jason Aaron's run and pushing it forward into the next chapter. Just how long the Marvel Universe will be lacking magic is yet to be seen, but Barber has clearly seen a good story opportunity and is keeping things running. Henrichon's scratchy artwork has a nice old-fashioned vibe to it, and works very well. (4/5)

Oliver Queen is back in Seattle after taking down the Ninth Circle's satellite. The Ninth Circle is not planning on taking that defeat lying down either, although their rage seems aimed less at Oliver and more at his villainous, presumed dead mother. Benjamin Percy has such a great handle on his cast at this stage that the story just flows off the page. He's helped out by some great artwork by Jamal Campbell, which complements work done elsewhere in the series while still finding space for a style of its own. This is one of DC's best monthlies, and continues to impress every fortnight. (4/5)

When we first saw Poe Dameron in The Force Awakens, he had finally tracked down Lor San Tekka - the one man in the galaxy who possessed the coordinates for where Luke Skywalker was hiding. Now, after 20 issues of the Poe Dameron prequel comic, he is finally on Tekka's trail. It is a bit odd to see legendary screen actor Max Von Sydow replicated in comic book form, but it's a very strong story development. This issue feels like set-up for what just might be the final story arc of this series; it's got solid writing and characters, but slightly unreal and photo-referenced art by Unzueta. (3/5)

Robin and Superboy find themselves trapped in another dimension fighting off a planet-sized foe. This climax to "Planet of the Capes" is a strong conclusion, although Tomasi's script is partially let down by inconsistent artwork thanks to a change in art teams. This is a breezy, enjoyable series that emphasises fun over drama, and there's always a place for that in superhero comics. Damian and Jon make a great team as well; they're like an exaggerated comedic version of their fathers. (3/5)
Posted by Grant at 10:37 PM