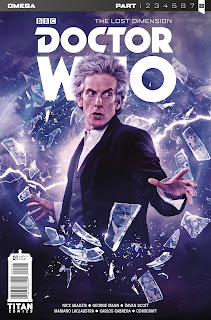 It has taken Titan Comics three attempts, but they have finally nailed a multi-Doctor Doctor Who crossover miniseries without feeling forced and without tying everything together with a rushed and disappointing finale.

By contrast, The Lost Dimension has been well-plotted, carefully thought out and brilliantly fore-shadowed. The entire storyline has circled around a mysterious white void that has been sucking things in from all of time and space. By the time the true nature of the void is revealed, it is simultaneously a shock and stunning obvious at the same time: the best kind of revelation.

Every Doctor gets at least a momentary cameo, with the bulk of the lead time shared between Doctors 8, 9, 10, 11, and 12. Mariano Laclaustra's artwork is superb, giving everything a beautiful aesthetic somewhere between painting and traditional pen-and-ink. Carlos Cabrera's colours only enhance it. It simply looks tremendous.

So congratulations to writers George Mann and Cavan Scott; while individual issues of the crossover have wavered in quality, they have pulled out one hell of a climax. And think this all started with a comic I absolutely despised... (4/5)

Under the cut: reviews of Atomic Robo, The Beautiful Death, Darth Vader, Extremity, Lazaretto and Superman.

Atomic Robo: The Spectre of Tomorrow #1

Atomic Robo has been running on and off for so many years now that it has become one of those comic books you sort of take for granted. It's cool, but you somehow just stop reading it and assume it will always be there. That should probably change, and more of us should probably read it. This new miniseries kicks off in 2017 and combines artificial intelligence, networked mini-robots, the beginnings of an all-new science fiction threat, and - oddly - arguments with Richard Branson. It's nicely observed, charmingly illustrated and regularly very funny; so basically Atomic Robo. (4/5)

Wayne, Jeremiah and Soham walk their way through a vast, empty city. Humans are almost entirely extinct; the insects are everywhere. Bablet absolutely nails the desolate, lonely tone that you want to get in this kind of post-apocalyptic narrative. His artwork has that perfect kind of odd kink to it, with distinctive character designs and a very subtle, soft, essentially "French" sort of colouring. To be fair however, something seems to have been lost in the transition from bande dessinee to American-style comic book. The pacing feels off. The cliffhanger ending here feels so abrupt that I swear that cannot be where the original French edition finished. It's great stuff, but may benefit from reading a collected edition. (4/5)

Darth Vader has been put in charge of the Emperor's new Force-powered Inquisitors, and dispatched to locate the former Jedi archivist Jocasta Nu. I am not a big fan of the Inquisitors. Introduced in the Star Wars: Rebels television series, they pretty much exist to allow a cartoon to have more light-saber fights when the only real evil light-saber user was Vader himself. Beyond that the issue offers a solid set-up for another Jedi hunt, and Nu seems a fairly interesting quarry. Camuncoli and Orlandini's artwork is solid, as are Curiel's colours. (3/5)

To repair Shiloh, Rollo must return to the Black Canyon to regain his battery. Meanwhile Annora continues her pursuit of the mysterious one-handed girl. Extremity has been such a consistent marvel: a wild, post-apocalyptic fantasy masterpiece with a distinctive, roughly-hewn art style and rich, emotive characters. It seems to exist on the edge of heartbreak, with characters on both sides struggling to survive against terrible injustices and emotional wounds. This issue is no different: keeping the tone and characterisation strong will pushing the story into what feels like its climactic direction. I cannot recommend this book enough. (5/5)

Things move from bad to worse in this deliberately nasty and unpleasant cross between Outbreak and The Lord of the Flies. A university dormitory has been quarantined in the middle of a viral epidemic, and if the virus - all full of insanity, delerium and blood pouring from the mouth and eyes - does not kill our protagonists Charles and Tamara, the violent and increasingly insane third-year students will. Jey Levang's artwork is perfectly suited to this kind of horror story: it's sketchy and rough, and coloured with queasy variations of green, red and purple. This won't be for everyone, but for those who do like this kind of story it's a pretty great one. (4/5)

Lex Luthor has been kidnapped, along with Superman, Lois Lane and Superboy, to the planet Apokolips. Lex is left dealing with the cultists who believe him to be Darkseid's destined successor, with Superman as an unwilling accomplice. Superboy is getting pursued by rival forces. Lois is enlisted into the Female Furies of Granny Goodness. It's all a big New Gods love-in, really, and while it currently isn't telling DC's most arresting storyline, it is entertaining and well illustrated. (3/5)
Posted by Grant at 9:25 PM