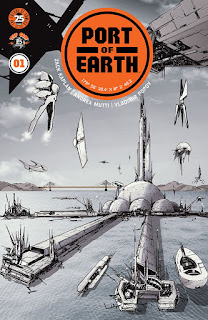 In a neat twist on the usual first contact story, Port of Earth depicts a future where aliens do come and make contact with humanity, but only to lease space on the Earth for an interstellar spaceport. The aliens keep to themselves, the humans get advanced technology in payment, and that is supposed to be it. Unfortunately now and then an alien leaves the transit zone, leading to murder, violence and all kinds of mayhem.

The real strength here is that the aliens genuinely feel alien, since we do not really get to see them and we have no insight into their motivations. It makes everything feel just that little bit unsettling and paranoid - can the Earth be sure it's made an even-handed deal?

Port of Earth is a great spin on a traditional science fiction set-up, and in a comic genre that sometimes struggles to find fresh angles writer Zack Kaplan appears to have hit one right on the head. While it is too early to tell how this series will go overall, as a set-up it is second-to-none. It also benefits from great artwork by Andrea Mutti, and subtle colours by Vladimir Popov. It has a very mature, distinctive aesthetic. So far, so good - possibly even great. (4/5)

Under the cut: reviews of Batgirl and the Birds of Prey, Daredevil, Ms Marvel, Scales and Scoundrels, and She-Hulk.

Batgirl and the Birds of Prey #15

A mysterious virus is taking out countless Gotham City residents - but only the men. That leaves the Birds of Prey to solve the problem, but when the epidemic grows out of hand and the government brings in Amanda Waller to supervise the city they are going to need all the help they can get. Imagine a Birds of Prey storyline featuring almost every female DC heroine you like, and that's pretty much this issue in a nutshell. Batgirl, Huntress, Black Canary, Poison Ivy, Catwoman, Harley Quinn, Lois Lane - and that's only half of them. As an opening issue it's tremendous. Roge Antonio's artwork and Marcelo Maiolo's colours are fabulous. With this many female leads there's always a risk of going the 'male gaze' route, and it's something they wonderfully avoid. (4/5)

Another Marvel series gets a soft relaunch with all the issue numbers of previous volumes added up to make a falsely huge issue number. If there was any doubt that Marvel was aiming for a 'legacy' feel, it is right there on the Bill Sienkiewicz cover. While Matt Murdock was in China, New York elected Donald Tr- I mean Wilson Fisk, as its new mayor. Now in control of the city, Trum- I mean Fisk, immediately uses the powers of his office to crack down on the city's various vigilantes. I remember many years ago DC ran a storyline in which Lex Luthor was elected President, and it seemed ridiculous. In 2017 this kind of story no longer feels so stupid; I suspect Charles Soule is going to get a lot of story mileage out of "Mayor Fisk". Certainly he's off to a rock-solid start. (4/5)

Ms Marvel and Red Dagger fight to stop a runaway train from causing a disaster. Despite some snappy dialogue and typically endearing character work, this issue feels like Ms Marvel in a minor key. The runaway train story feels much too simple and rote to drag out to two issues - Wilson even has the characters mention that it's all basically a retread of the Denzel Washington film Unstoppable - so despite some nice art and colours by Olortegui and Herring, it is ultimately a throwaway issue. Fun enough if you're a regular, but nothing exceptional. (2/5)

A thief, a guide, a prince and a bodyguard are trapped beneath the rubble in an ancient underground city, with no apparent means of escape. To make matters worse, a giant monster is hunting them down. To make matters double worse for Lu the thief, a bounty hunter is underground with them and specifically hunting her down. This is warm, hugely entertaining fantasy adventure with a lovely and simple art style and a charming tone. I think this book works as well as it does because it is not here to mock the sort of Dungeons & Dragons-style fantasy adventure, but rather it simply embraces it fully with its tongue in its cheek. (4/5)

As with Daredevil, all the older She-Hulk comics have been added up to make this issue #159. Jennifer Walters meets with a fan - only to discover that fan was a dangerous under-statement. I really loved Mariko Tamaki's first story arc on She-Hulk (then titled Hulk), as it presented a fairly subtle and nuanced - for superhero comics, anyway - profile of post-traumatic stress. This feels sidelined now, in an issue that feels fairly average and with an unwanted villain reveal. (Hint to Marvel: it's not a shock if a villain enters the room when they've already been on the cover.) Time will tell as always, but I'm not as enthused by this run as I was. (2/5)
Posted by Grant at 1:51 PM