Highlander: The Series: "The Gathering" 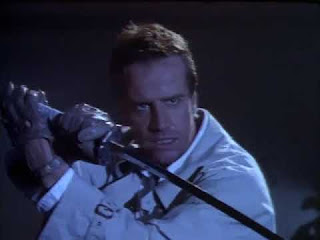 Small-time thief Richie Ryan (Stan Kirsch) breaks into the antique store owned by the mysterious Duncan Macleod (Adrian Paul) - only to stumble into a confrontation between Macleod, a sword-wielding immortal, and the villainous Slan Quince (Richard Moll). Slan is intent on decapitating Macleod and stealing his power, however another stands in his way: Macleod's relative and fellow immortal Connor (Christopher Lambert).

In case you spent the 1980s under a rock: Highlander was a moderately successful fantasy film released in 1986, which starred Christopher Lambert as a Scottish highlander cursed by immortality. It depicted a disparate group of immortal warriors scattered throughout history that would fight one another to the death - by decapitation, the only means that worked permanently - until they would all assemble for "the Gathering", finish off killing one another until only one survived, at which point the winner would receive a mysterious "Prize". It was very stylishly directed by Russell Mulcahy, boasted a great soundtrack by Michael Kamen and Queen, and did a particularly strong line in flashbacks to various historical periods. In 1992 its producers decided to make a TV series out of it.

Christopher Lambert was much too expensive to headline the series - a French/Canadian co-production - and indeed his sole appearance in the series used up a significant chunk of the episode's budget. That explains why instead Highlander: The Series features Adrian Paul as the pony-tailed younger 'cousin' Duncan Macleod, and why the production values of the pilot episode are startlingly low. This is really quite cheesy-looking television for much of its 42 minutes.

It is also incredibly awkward. Highlander works as a self-contained film (its sequels not so much) because it has a simple premise and an immediate ending: a group of immortals fight with swords until one survives. For a television series that seems a much less engaging premise, and "The Gathering" really does suggest that it is going to be a weekly series of duels with a conveyor belt of scenery-chewing swordspeople.

As the villainous Slan Quince, Richard Moll is jaw-droppingly painful to watch. He snarls, he goads, he sneers: he is a walking assemblage of bad performance ideas. Adrian Paul broods relentlessly, which does not make him see too much fun either - in this case he thankfully gets much better pretty much from episode 2. As love interest Tessa, Alexandra Vandernoot does get a nice little scene noting the uncertain future in which she will age and Duncan will not, but she also gets one or two moments of partial and implied nudity that really feel a bit out of place and tacky. Stan Kirsch plays plucky orphan kid Richie, a character that simply does not have anything to do here: he's introduced because he's a regular cast member, but it might have been smarter to just introduce the immortals fighting part of the series first and left his introduction to the following week.

You can see why Christopher Lambert was dragged in to help launch the series: he is so effortlessly charismatic and relaxed as Connor (he'd already played the role twice on the big screen at this point) that he simply walks over the rest of the cast.

So basically this is laughably bad television at this point. It looks cheap, it's over-acted and silly, and while the historical flashbacks have some solid work in them the present day parts are genuinely terrible. It can only go up from here. At least I seem to remember it goes up from here; after all, it's been a quarter of a century.

A small note: I'm watching Highlander: The Series on Madman Entertainment's recent complete series boxed set, which features the episodes in production rather than broadcast order. I have no idea if this is just for Season 1, or whether or not it will cause weird continuity issues, but I guess we will find out as we go.
Posted by Grant at 7:33 AM