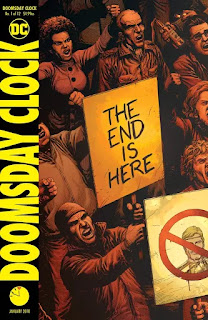 It is 1992. The United States government has uncovered the truth: that several years earlier the world-famous superhero Ozymandias faked an alien invasion to prevent global war, murdering hundreds of thousands of Americans in the process. Now the whole world is falling apart. Thermonuclear war seems inevitable. Meanwhile a vigilante presumed dead breaks into prison to rescue a pair of criminals.

Alan Moore turned 64 on Saturday. It seems a fairly distasteful birthday present, then, that DC Comics would yesterday publish Doomsday Clock: the sequel to Watchmen, arguably his most famous work. Moore and artist Dave Gibbons produced Watchmen for DC Comics between 1986 and 1987, under a contract in which the rights to the characters would revert back to their creators once the comic was out of print. Put simply, Watchmen never went out of print. It remains in print today, and as a result Moore and Gibbons never got the rights back. Warner Bros have produced a Watchmen film, they're currently producing a HBO TV series, and a few years ago they even produced a string of fairly average prequel comics about the key characters. Moore has long since washed his hands and moved onto more interesting projects, but whenever DC mines back into Moore's work - knowing that he created these characters and that he doesn't want them exploited in this fashion - it feels a remarkably tacky move.

And here we are in 2017, with DC not only publishing the sequel to their highest-selling graphic novel of all time but making it a crossover with the DC Universe. Superman meeting Dr Manhattan. Batman meeting Rorschach. It is as if they simply wanted to double-down on the stupidity. This is not simply a cash-in on Moore and Gibbons' work, it is simultaneously the climax to the DC Rebirth story arc that has been running through the whole DCU line since last May.

So here's the kicker: based on the first of 12 issues, it's actually really, really good.

Writer Geoff Johns, artist Gary Frank and colourist Brad Anderson are a sensational creative team, and it is testament to their talent that the first issue of Doomsday Clock not only respects the narrative and the style of Watchmen, but strikes its own tone and direction as well. While at a corporate level this is clearly a wholly mercenary exercise, at a creative one it is at least clever and inventive. You will probably come to Doomsday Clock with expectations; there is a reasonable chance this issue is not what you expect.

There are obvious questions to ask, and of course most of them are not yet answered. One revelation the issue does provide is how popular anti-hero Rorschach could possibly be walking around New York several years after visibly getting disintegrated. Like the issue generally, the answer is not one that I expected to see. The nine-panel grid layout that came to define Watchmen's aesthetic does return, but rather fitting it is loosely adhered to and expands the look of Doomsday Clock considerable.

If you don't want to support DC's attempt to further strip-mine Moore's work against his wishes, I cannot blame you. If you're on the fence, or a bit curious, I can promise you that this is much better than I expected. I've shifted from planning a one-issue drive-by to assess the damage to keen reader in about 36 pages. This is a tremendous first chapter. (5/5)
Posted by Grant at 8:58 PM