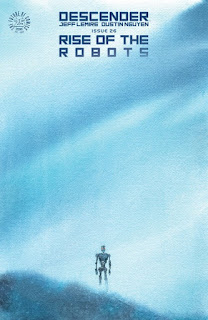 Talk about climactic: Tim-21 and Tesla fight off Tim-22, while the UCG and the Hardwire finally confront one another in open space - with catastrophic consequences.

All of that is probably unintelligible to you, assuming you don't already read Descender. This is a distinctive and smart science fiction series in which a galactic civilization was almost destroyed by a mysterious robot invasion, and ten years later it has become clear that the robots - all apparently destroyed - were not as thoroughly eliminated as had been assumed.

It's dramatic, intelligent and original, the latter nowhere more so than in Dustin Nguyen's excellent artwork. The entire series is illustrated in loose watercolours that are high on beauty but low on background detail. It's a style that forces the book to concentrate on the characters, not the technology around them. Given the technology-centric storyline, that creates a wonderfully odd effect.

This issue is probably the most satisfying Descender has had since it started more than two years ago. It pulls a lot of threads together and pushes the series into an all-new phase. (4/5)

Under the cut: reviews of Doctor Aphra, Ninja-K and Super Sons.

A fresh direction for intergalactic archaeologist and thief Aphra, one that starts brightly and concludes- well, I'll leave that to readers to see for themselves. It's a fast-paced and enjoyable read, and sets up Aphra's new status quo brilliantly. Emilio Laiso and Rachelle Rosenberg present some great visuals to match the script, which sees regular Kieron Gillen joined by Si Spurrier. If this is a changeover of writer, Spurrier is a tremendous choice. This is a great, fresh and hugely entertaining issue for my favourite Star Wars comic. Lucasfilm should feel welcome to adapt her to the big screen whenever they're ready. (4/5)

While I love a large number of Valiant's superhero characters, I have never really warmed to Ninjak: an English ninja super-spy, he seems to be a fairly risible example of that Orientalist trope of the white guy being better at the 'mysterious' Asian martial art than the Asians. This relaunch doesn't really change that opinion, but it does add in some intriguing back story on MI:6's ninja-training program as well as boasts superb artwork by Tomas Giorello - so good that it's almost worth staying on the book just to see the pictures. If you're a Ninjak fan you'll likely find this a brilliant new story arc. (4/5)

A step up for Superboy and Robin as their fathers provide them with their own secret base, and a means of tackling cases too small for the adult Justice League to handle. It's a sweet little issue - almost a vignette really - that really showcases the best element of this book: the relationship between the two boys and their respective fathers. It has that strong legacy appeal that DC always has when it's at its strongest. There's a neat little interlude in the middle that points towards the next story arc - one that seems to tie into the recent time-travelling arc in Detective Comics - but overall this is a very nicely done little breather. (4/5)

I'm not going to lie - The Wild Storm is an increasingly difficult book to keep straight in my head. Every issue seems to throw in more back story, more characters, more questions to be answered down the line, and so on. It is honestly getting difficult. On a moment-moment basis, however, it is tremendous. A highlight of this issue is to a superbly realised samurai fight during a flashback. It's a masterpiece of timing and panel layout, even though its relevance to the broader story remains unclear. So long as Warren Ellis keeps writing such strong scenes, and as long as the questions all do get answered by the final issue, I'm happy to run with this monthly dose of violent weirdness. (4/5)
Posted by Grant at 9:11 PM