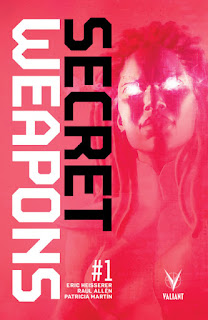 Livewire is a "technopath", a psychic who can use her mind to control electronic and computer devices. She's one of many so-called psiots in the world. Now a third party is tracking down a group of low-powered psiots, with Livewire hot in pursuit.

These low-level psychic powers are actually rather sweet - one young woman can talk to birds, while a young man has the ability to make inanimate objects glow. Writer Eric Heisserer gives them immediately distinctive and likeable personalities as well, making it a pleasure to be in their company for the duration of the issue. They are also very nicely drawn by Raul Allen and Patricia Martin. There is an 'indie' sensibility about the art in this issue. It feels a bit more grounded and simple than the usual superhero universe artwork, and that would tremendously to the book's advantage.

Valiant do such a good job with these four-issue miniseries. They are easy to pick up, easy to digest, and consistently imaginative and enjoyable. In many ways it seems a smarter approach to a superhero universe than either DC or Marvel: find a story worth telling, with a character worth using, get in and out in a brisk fashion, and move onto the next worthwhile story. Based on issue #1 Secret Weapons already feels pretty worthwhile. (4/5)

Under the cut: reviews of Batgirl, Ghostbusters 101, Kull Eternal, Rebels and X-O Manowar.

Batgirl gets called in to investigate a haunting in a swimming pool in this self-contained one-shot story. It is fairly superficial stuff to be honest, and weirdly Batgirl's insistence that there is a scientific explanation for everything and no such thing as the supernatural rings hollow when you consider she counts Wonder Woman and Zatanna among her friends. Eleonora Carlini's artwork is a little too much like a stock manga riff for my liking: it lacks a distinctive identity of its own. This is an enjoyable issue to an extent, but it could - and should - be doing a lot better than this. (3/5)

Two sets of Ghostbusters have collided via parallel worlds, and now have to team up against a supernatural event threatening both. This is pretty much on a par with the previous issues: fan-pleasing interactions between characters, a good sense of humour, and the sort of story to appeal to the hardcore Ghostbusters audience. It does what is says on the tin, and with these kinds of tie-in books there is no harm in that. Dan Schoening's very animation-style artwork is a particular strength here, and visually ties the two universe together. (3/5)

Kull the Conqueror is one of the less well-known characters created by Robert E. Howard, whose most famous creation Conan the Barbarian has been a mainstay of comic books for decades. Kull has had a fair share of comic adaptations himself, but this one seems considerably different to the others. It begins in some science fictional future, with Kull fighting alongside a military group against a race of shape-shifting lizards. It then jumps back thousands of years to the fantasy Kull, ruling a kingdom and getting tempted on a quest. How the two worlds are connected is not revealed in this issue at all, but it's an enticing enough start. Pizzari's artwork is nice and moody, and well coloured by Farrell. Waltz's script feels relatively traditional in both time periods, but it will interesting to see how he stitches them together. (3/5)

Rebels: These Free and Independent States #4

John Abbott built the USS Constitution to fight the British Navy. Now, at last, that day has come. John is a deeply fascinating character: essentially an autistic man born in an age with no understanding of what that means. He struggles to connect with those around him, and they fail to realise precisely how he thinks and relates to his environment. In this issue his drive and focus pushes him into a deeply unwanted place, and it sets up next month's fifth and final issue for a potentially tragic end. This is a beautifully written issue. Andrea Mutti's artwork is great as always; Lauren Affe's colours are subtle and enhance the artwork tremendously. (5/5)

Aric continues to pursue the Cadmium President on behalf of his Azure masters. This fresh take on X-O Manowar feels very heavily inspired by Edgar Rice Burrough's A Princess of Mars, and it is a take that works marvellously for the character. Lush alien environments, unfamiliar kingdoms and civilizations, and a pleasing blend of fantasy and science fiction. Doug Braithwaite's artwork is tremendous as well, giving everything a nice blend of realism and fantasy. This remains one of the best new books of 2017: more readers should be checking it out. (4/5)
Posted by Grant at 8:58 AM