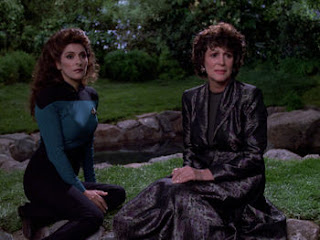 It is 1 November 1993 and time for another episode of Star Trek: The Next Generation.

Lwaxana Troi (Majel Barrett-Roddenberry) has returned to the Enterprise to help a race of psychics better learn verbal communication. When she collapses unconscious in the ship's arboretum, her daughter Deanna (Marina Sirtis) is forced to enter Lwaxana's dream-state to uncover the cause of her collapse.

The merest mention of Lwaxana Troi is usually enough to make me run for the hills shrieking. She is a complete tonal mis-match for Star Trek: The Next Generation, adding an unwanted sort of 'saucy' sex comedy banter to any episode that she inhabits. There have been some exceptions for sure, but not enough to stop that instinctive flinch the moment she appears on the screen. What a pleasant surprise, then, to discover that in her final episode of The Next Generation the characters get her best story yet - and arguably ever, if one includes her handful of Deep Space Nine appearances.

It is a very bold move to take a broadly comedic character and throw her into what is ultimately a genuinely tragic drama. At the episode's core lies the loss of a child - an older sister that Deanna never knew she had - and it treats that less with an impressive degree of sensitivity and respect. It boasts a top-notch performance by Majel Barrett-Roddenberry as well. The episode keeps that central tragedy hidden for quite a long time, and does a superb job of masking it with suspicions about the psychic Cairn and whether or not their intentions are evil.

The Cairn themselves are oddly charming, and just a little bit unintentionally funny. We only really get to meet two of them: the Cairn leader Maques (Norman Large) and his daughter Hedril (a surprise Kirsten Dunst). A genuine attempt has been made to make the Cairn feel properly alien: they speak in halting, under-confident English, and Maques regularly strains to find the words that he needs to communicate. The episode is at its funniest whenever he communicates telepathically, which is created by Large staring with impressive intensity while the camera tracks in towards his face. Once you find it funny, every instance just becomes a bigger excuse to laugh out loud.

It is rather surprising to see The Next Generation attempt a surreal dream world episode directly after another one, the Data-centric "Phantasms". Of the two, "Dark Page" is by far the better episode, but one would think the production would attempt to separate them with an least one unrelated episode in the middle. In terms of presentation, the dream world here is well familiar to long-term Next Generation viewers, which means wide-angle lens, creepy lighting and random odd characters turning up in starship corridors.

This is a strong and effective episode of The Next Generation, something that Season 7 has so far had in worryingly short supply. It is the third good episode out of seven, bringing the quality ratio back up to 43 per cent; still much too low, but at least it's heading in the right direction.
Posted by Grant at 9:03 AM