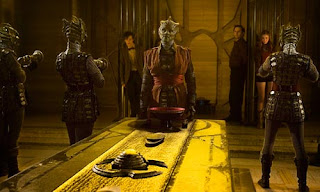 Amy Pond (Karen Gillan) has been dragged far underground into a sleeping hive of Silurians - the original sentient inhabitants of the Earth. While a Silurian held hostage by a frightened group of humans on the surface, the Doctor (Matt Smith) and Rory (Arthur Darvill) race to prevent an inter-species war.

About six months ago I watched and reviewed the first part of this two-part adventure, "The Hungry Earth". Life got in the way a little, but after viewing Doctor Who's superb Season 10 finale "The Doctor Falls" I was keen to watch some more 21st century Who so figured I should finally get around to rewatching "Cold Blood". As with the first episode there is a certain level of timeliness about viewing the episode, since it is written by Chris Chibnall - the writer/producer who takes over running the entire series from 2018.

This is a rather old-fashioned story, not only referencing the original "Doctor Who and the Silurians" serial of 1970 but in many respects copying its key plot points: the Doctor is desperately attempting to negotiate a peace between Silurians and humans but fearful individuals on either side are making his task close to impossible.

"The Hungry Earth" attempted to stage an alien incursion with effectively one alien: Neve McIntosh's warrior Alaya. Budget constraints mean that "Cold Blood" does not do too much better, effectively giving the viewer three more named Silurians plus a bunch of masked and silent warriors to stand around in the background as extras. What is more, one of the three new speaking roles in Alaya's twin sister Restac - meaning Neve McIntosh is playing a double role. It is a shame that the superb original design of the Silurians was abandoned in favour of a more human-like prosthetic, but with the more limited budget of Season 5 a more faithful adaptation was never going to be possible.

There is running around, and quite a bit of back and forth. Up on the surface Ambrose (Nia Roberts), driven by fears for her husband and son's lives, winds up accidentally murdering Alaya while attempting to torture her. This act winds up forming the core of the episode: making a terrible mistake and having to live with the consequences. While Ambrose does get her family back, the episodes to its credit does not shy from making her acknowledge her appalling crime.

Much like the first part, "Cold Blood" is solidly written but unexceptional. It is only the episode's final minutes that really jump off the screen. On the run from the Silurian hive, the Doctor, Amy and Rory encounter yet another smiling crack in time - the season's ongoing mystery. This time around the Doctor actually reaches inside and pulls something out - a fragment from the explosion that seems to have caused the cracks across the universe. It's a piece of the TARDIS, in what is a genuinely surprising and ominous development. What is worse Rory is shot by a dying Restac: when his dying body is hit by the light from the crack, like the soldiers in "Flesh and Stone" he is erased from history. Amy's trauma at his death and his imminent erasure is powerfully performed by Karen Gillan - it is the best performance she has given in the series so far. Then she forgets him, in an appalling flash, and only the Doctor and the viewer are left to know what a terrible, unimaginable horror has just occurred. It is tremendously creepy.

Quite why the Doctor can reach into the crack when others even getting close to it cease to exist is not explained, and it actually forms part of what seems like a growing pattern: as showrunner Steven Moffat is very good at cool ideas and iconic moments but he shows a sort of hand-waving disregard for internal logic and continuity. He could provide a line to explain how the Doctor can touch the crack, but he simply does not seem to care all that much about the fine details. It all works on an emotional level at the time, but as his tenure as producer goes on and the story arc develops from Season 5 to Season 6 the vagueness does become quite maddening.

Another good episode. With eight out of nine episodes getting my thumbs-up, the quality ratio of Season 5 rises to 89 per cent. This is one of the most consistently enjoyable seasons of modern Doctor Who there has been.
Posted by Grant at 9:07 AM