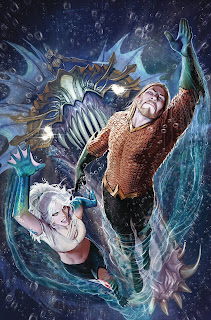 The king is dead - or so the villainous Corum Rath believes. Instead the deposed King Arthur hides out in the depths of Atlantis, defending the city's poorest and most vulnerable from Rath's soldiers. Meanwhile Mera bombards the city from above in an attempt to break inside and rescue her lover.

This second issue of the now-monthly Aquaman comic is great. Sejic's artwork makes it a visually beautiful read, and Abnett's story has gracefully repositioned the series as a sort of underwater high fantasy. After making her post-Flashpoint debut last month, Dolphin gets a proper re-introduction. She seems a hugely promising character.

It is great to see Aquaman stretch into a fresh style and direction, particularly with such strong artwork on it at the moment. It deserves to be a huge success. (4/5)

Under the cut: reviews of Batman, Batwoman, Green Arrow and Superman.

A man named Charles Brown finds himself caught between Batman, the Joker and the Riddler in this self-proclaimed "War of Jokes and Riddles Interlude". Initial concerns that this was going to be a redundant fill-in issue were thankfully baseless: this is a well conceived and unexpected origin story for a Batman villain that comes out of left field and packs a strong emotional wallop. Clay Mann's artwork is strong. If Tom King and Mikel Janin needed more time to complete the main storyline, I am happy they got it - this issue is an excellent stop-gap. (4/5)

The first story arc of Batwoman focused on Kate Kane's return to the island of Coryana, where she once shared a romance with its effective ruler Safiyah Sohail. This slightly surprising issue jumps back to show the beginnings of that romance. It's a beautifully paced issue with a great insight into Kate's initial post-military life, and is wonderfully illustrated in a painterly style by Stephanie Hans. It may not be the Batwoman comic that I expected, but I like it. (4/5)

Oliver Queen's cross-country odyssey to defeat the Ninth Circle brought him into a team-up with the Flash. Now the next stage of the adventure pairs him with Wonder Woman instead. There is a very old-fashioned vibe to this storyline, which ostensibly continues the long-running Ninth Circle arc but really acts as an excuse for a string of DC Universe guest stars. This is a fun issue, but in all honesty it lacks impact. Jamal Campbell's artwork is good and matches the general tone of this volume of Green Arrow very well. (3/5)

After the stresses and panics of recent events, the Kents go on a road trip across the USA, checking out patriotic monuments and tourist attractions. Anybody holding their breath waiting for the 'real' story to drop are probably going to pass out: this issue is exactly what its premise suggests. Clark, Lois and Jonathan pack themselves in a camper van and go on vacation. There is a wonderful sort of low-key joy to it. Guest artist Scott Godlewski absolutely nails the art as well: it's a surprising and warm issue that looks fabulous as well. (4/5)
Posted by Grant at 9:32 AM