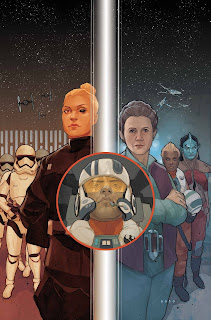 Poe and fellow X-Wing pilot Snap head off to track down the traitorous Oddy Muva. Meanwhile Suralinda and Jess are sent in an old Y-Wing to undertake reconnaissance for the Resistance's propaganda war against the First Order. At the same time Commander Malarus resolves to hunt Poe down and stop his interference with First Order business once and for all.

There is a sense of story threads pulling together in this issue, which makes me wonder if Poe Dameron is streaking towards a conclusion some time in the next few months. It makes a lot of sense: The Last Jedi debuts in cinemas in December, bringing with it not only more on-screen action for Poe Dameron but also opening up further possibilities for tie-in comic books.

That sense of building towards a climax helps this issue a lot. It's an engaging read that juggles quite a lot of characters, and pushes them towards conflict in the next issue. Angel Unzueta's artwork is strong, and nicely coloured by Arif Prianto. This has been a relatively uneven series, but it does seem to be improving as it goes. (4/5)

Under the cut: reviews of Daredevil, Doctor Strange and Ms Marvel.

With his legal ploy to let vigilantes take the stand in criminal trials with their secret identities intact rejected by the State Court, Matt Murdock resolves to take his case all the way to the Supreme Court. Meanwhile the hitman known as Tombstone continues to hunt him down on the Kingpin's orders. While that's essentially the plot, the meat of this issue is Matt finally having a conversation with best friend Foggy Nelson - who has been absent from Daredevil for the entirety of this relaunch. It is a wonderful re-introduction, adding another solid chapter what has been an inventive and cleverly developed storyline. The only downside is Alec Morgan's artwork, which does not feel as if it suits the title's general aesthetic of recent years. (3/5)

The intrusive and generally uninvolving Secret Empire tie-in continues. Spider-Woman, Doctor Strange, Ben Urich and Wilson Fisk remain in hiding as Baron Mordo hunts them down across a reality-warped New York City. The art is solid but a little muddy between the inks and colours. The story is simply dull. It is far from the worst I've read from Marvel in recent years, but it simply has no sense of urgency or intrigue. Perhaps if readers were also reading Secret Empire that would make a difference. I am not, and it makes this whole storyline feel pointless and unnecessary. (2/5)

While the villainous new mayor Chuck Worthy leads the charge to kick all superheroes out of Jersey, Kamala's brother Aamir has been detained on suspicion of having super-powers himself. This issue opens with an outstanding monologue on radicalisation and Islamic terrorism that is, hand on heart, worth the cover price on its own. Beyond that there's the continuing storyline of Kamala's fight against Worthy, and Marco Failla's hugely appealing artwork. Once again G. Willow Wilson and her art team prove that there are few books on the market as consistently wonderful as Ms Marvel. (5/5)
Posted by Grant at 12:44 PM