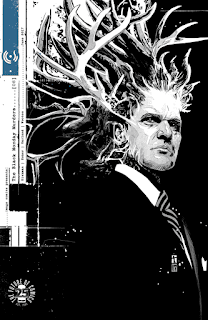 I have mentioned this multiple times in earlier reviews, but it always bears repeating: The Black Monday Murders is one of the most interesting comic books on the market right now. It's complex, and dense, and is presented in an inventive combination of comic book narrative and background text.

This kind of hybrid format is not new for writer Jonathan Hickman, who created a range of provocative and interesting miniseries before becoming one of Marvel's key superhero writers. Here he presents a story about a global economy run from behind the scenes by all-powerful supernatural and magical forces. There is a power struggle within the echelons of power, and at the same time a half-believing homicide detective is trying to work his way behind the scenes to understand what the hell makes the world tick.

Tomm Coker uses a very realistic, photo-referenced art style to great effect in this book, making it feel distinctly film-like and sophisticated. Colourist Jordie Bellaire gives it all a gloomy, limited palette that beautifully ups the tension throughout.

Each issue is longer than your average comic book, using its extra space to expand the world, illuminate background detail and character, and sometimes simply give the narrative extra room to develop the strongest possible impact. I never realised that financial horror could be a genre. In the hands of the Black Monday Murders team, it's a great one. (4/5)

Under the cut: reviews of Batwoman, Green Arrow, Head Lopper and Superman.

Batwoman's first story arc concludes here, as Kate takes on Tahani and races to save the island of Coryana from being devastated in a bombing. It is all weirdly unsatisfactory in a manner that is difficult to fully describe. Technically it is competently written. Steve Epting's art and Jeremy Cox's colours are both effective. Despite this there is just an overwhelming sense of being 'good enough' rather than particularly good or gripping. DC and Marvel always publish more superhero books than they need to; this really feels like one of the extraneous ones. It is relatively entertaining, but hugely unnecessary and not particularly original. (2/5)

Seattle is to be rebuilt as Star City. Oliver Queen has revealed himself to the public, and been immediately arrested on a trumped-up murder charge. When it becomes clear that the same criminal cabal that destroyed Seattle has plans for the rest of the country, Queen skips bail to chase across the USA on a quest to save it. The first 25 issues of Green Arrow (including the Rebirth issue) pretty much told one rolling story, and this extra-length issue kicks it off into a fresh direction. It is really satisfying to see DC Comics take on this sort of long-form storytelling again: heavily serialised, with expanded supporting casts and a story that gets more satisfying the more invested in it its readers become. This issue is pretty great stuff, and I'm keen to see where Oliver's journey takes him. (4/5)

You just need to look at the contrast between Head Lopper and The Black Monday Murders to see why Jordie Bellaire is such an in-demand colourist. She has a great visual eye and always picks the best palette for any given project. Her work here is striking and boldly contrasted from scene to scene, and creates a very strong classic effect. The story itself is beautifully stripped-back heroic fantasy: MacLean's script and artwork give the story what it needs rather than any extraneous detail or character. It is, in effect, the best Conan comic not actually adapted from Robert E. Howard. There is so much power and impact in the most simple of visual images, and a wonderful Lewis Trondheim-esque aesthetic. (5/5)

A shipping delay on the former led me to read both issues #24 and #25 at the same time, one after the other. The disgraced former superhero Manchester Black has returned, having secretly established himself under Superman's nose in his new home town of Hamilton. Using his mind-controlling powers, he has not only super-charged Jonathan's developing powers, but made him an ally as well. This is well written and nicely illustrated - although the number of inkers on issue #25 suggests a bit of a 'last-minute special' - but I simply don't like Black as a character. He feels like an awful sort of early 2000s commentary on mature-readers characters that feels much too out of place for the tone established in this book over the past year. Fans of the character will probably have a lot more fun, although even they might struggle with the conclusion in issue #25. It comes across as just a bit too silly for words. (3/5 (both issues))