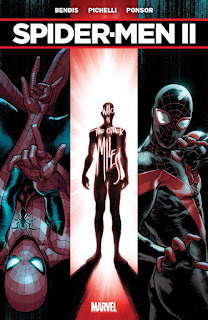 It has been several years, but Marvel has finally made good on the promise at the end of their miniseries Spider-Men and finally started publishing the sequel. The original series featured Peter Parker following the villain Mysterio to an alternate universe where he was dead and teenager Miles Morales had taken his place. Now both Peter and Miles live in the same re-ordered reality, but the portal that opened for Peter has now opened once again.

This is top-notch superhero entertainment, with a witty, well-paced script by Brian Michael Bendis that adds ominous foreshadowing through flash-forwarding and which uses the earlier miniseries as a starting point without disenfranchising readers who didn't read it. At the same time Sara Pichelli and Justin Ponsor are doing some of the best art they have ever done with a Spider-Man book; for both it feels like they are charting into new stylistic territory. It looks phenomenal.

It is absolutely wonderful seeing the two Spider-Men interacting with one another and working together. This series is off to a great start. (5/5)

Under the cut: reviews of Action Comics, Darth Vader, Doctor Aphra, and Hulk.

Superman is blind, and his greatest enemies have joined forces to kill him - thankfully the cavalry has just arrived, including Supergirl, the Chinese Superman, Steel, Superwoman and Lex Luthor. This is the sort of comic book Dan Jurgen writes best: extensive use of supporting characters, big-scale action scenes, and a very heroic and noble depiction of Superman himself. Guest artist Viktor Bogdanovic has a very sharp, angular style. It's a bit of a jolt from the art in issue #982 but it works pretty well. (3/5)

In the aftermath of Revenge of the Sith, a young Darth Vader journeys to a distant world to slay the exiled Jedi Kirak and ensure his place as new Dark Lord of the Sith. It is a reasonably well staged fight, and will probably entertain plenty of Star Wars enthusiasts. For me, I'm less impressed. Simply because you can tell a story it does mean you always should, and the story of an inexperienced Darth Vader slowly learning how to be a villain is not something that I think ever needed to be told. I love the character enough to stick with this for a few more issues, but it needs a rethink if it's going to work in the long term. (2/5)

Having escaped the Screaming Citadel, Aphra returns to her main objective: selling off the preserved AI replica of an ancient Jedi Knight to the highest bidder. It's funny stuff, particularly in Aphra's continued interactions with her entirely untrustworthy crew - and a great end-of-issue cliffhanger suggests they're even less trustworthy than she probably thought. I can't help but think this spin-off ongoing is where Marvel needs to go with their Star Wars comics: Aphra is an original character to the comics, freeing Marvel and its writers to do whatever they like with her. They have the advantage of telling her stories within the Star Wars universe, but are not shackled by the continuity requirements of the films and cartoons. (4/5)

A cruel prank involving a mutagenic drug has transformed an Internet celebrity chef into a giant monster, and Jennifer finds herself back in the superhero saddle in an attempt to track him down and find him a cure. This second story arc is a very organic follow-up to the first, as Jennifer slowly comes to terms with her new state as a more rage-filled Hulk and begins to question whether or not to continue trying to fight crime under those new conditions. Georges Duarte's artwork has a nicely indie sort of a look to it. This continues to be a pretty great comic. (4/5)