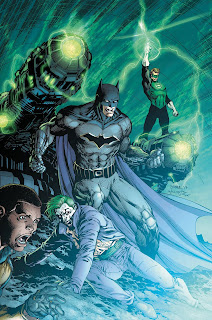 Batman's quest draws him closer to the mysterious metal that may hold the secret to the entire existence of superheroes. Back in the Batcave, Duke Thomas and Hal Jordan confront the Joker - who has been held captive there without anybody's knowledge.

This second prologue issue to the upcoming miniseries Metal is nowhere near as effective as the first. Where the first felt provocative and foreboding, the second feels off-base and awkward. The various artists jamming together also feel a lot more discordant this time around, suggest perhaps the labour would have been divided better giving each artist their own issue instead of getting them to each one all together.

There is some big and provocative hints thrown around regarding the origins of DC's pantheon of superheroes as well, with an admittedly quite clever new take on the concept of 'metahumans'. It even shows off its roots back in Scott Snyder's hugely successful Batman run. Altogether it's adding into something that is certainly ambitious in places but could quite easily collapse into hideous and self-indulgent mess. I have my fingers crossed that once Metal commences in August it will also settle down and prove a large-scale entertaining epic. (2/5)

Under the cut: reviews of Detective Comics, Dread Gods and Freeway Fighter.

While Batwoman and Batwing try to get to the bottom of the mysterious new robot Azrael, Batman asks Zatanna for help with his own problems - help she cannot afford to provide. I love how serialised Detective Comics feels these days, with ongoing plot threads running seamlessly through each individual story arc. This issue also benefits from a much stronger use of Azrael, a character with whom I have never quite engaged. Martinez and Fernandez's artwork is excellent to boot. (4/5)

A new title from IDW sees the Greek gods re-imagined with a science fiction bent, as the gods turn out to be some sort of future entertainment program - but are they self-aware? It all feels remarkably mid-1990s in look and tone, and there's likely a good reason for that: this issue launches sub-print Ominous Press, a revival of a short-lived 1990s publisher created by Wizard magazine contributor Bart Sears. It feels 20 years out of date, and lacks a solid hook to engage the reader. Anyone nostalgic for the period may enjoy it, but for me Dread Gods does not hold a lot of appeal. (2/5)

Ryan and Bella are on the run from a road gang desperate to steal Bella's Interceptor. This is not a particularly ambitious comic: the story is simple, the characters very familiar, and so on. At the same time it achieves its modest goals completely. This is an entertaining post-apocalyptic action comic, with strong artwork by Simon Coleby and very effective colouring by Len O'Grady. It is also a really inventive angle for an adaptation: taking a popular 1980s gamebook and actually acknowledging the world-building that book contained. I really hope Titan have a few more Fighting Fantasy tie-ins up their sleeve. For a nostalgic child of the 80s this is great fun. (3/5)
Posted by Grant at 9:24 AM