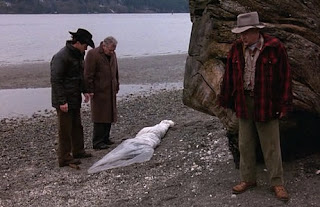 It is 8 April 1990 and time for the pilot episode of Twin Peaks.

The small town of Twin Peaks, Washington, is rocked by the discovery of popular high schooler Laura Palmer, her dead body found naked and wrapped in plastic on the river's shore. When a second missing high schooler is found raped and tortured across state lines, the FBI dispatches Special Agent Dale Cooper (Kyle MacLachlan) to work with local sheriff Harry S. Truman (Michael Ontkean) and investigate the crimes.

Twin Peaks burst onto the television landscape towards the end of the 1989-1990 broadcast year, burned brilliantly for a season and a half, and then collapsed due to audience disinterest and behind-the-scenes turbulence. It is arguably that here never been another drama to last for such a brief amount of time yet exert such a phenomenal influence over the entire subsequent history of American television. The shadow cast by Twin Peaks is enormous. It is echoed in the quirky comedy-dramas of Northern Exposure and Picket Fences, the creepy mise-en-scene of The X Files, and the swathe of 'murder in a small town' serials that have continued to be produced both in the USA and overseas. Each of these subsequent works has drawn inspiration from some aspects of Twin Peaks, yet none have really managed to draw from them all. The original series remains comparatively unique.

It is also coming back: Showtime has commissioned an 18-episode third season to commence next month (it will be on Stan here in Australia), a mere 26 years since the second season ended on a whopping great cliffhanger. With the series returning, and having not re-watched the existing episodes in many years, it seemed an appropriate time to dive in and catch up.

Twin Peaks was the creation of acclaimed filmmaker David Lynch and Hill Street Blues writer Mark Frost. I think it is safe to call it a very weird series, occupying a similar sort of 'Americana-gone-bad' aesthetic to Lynch's earlier film Blue Velvet but carving its own distinctive niche. It feels rich in American popular culture - coffee, country towns, cherry pie, high school sweethearts, and the like - yet at the same time feels rotten and warped. Twin Peaks is a town with a lot of deception and mistrust flying around in the background. This pilot episode alone features three secret love affairs, and the first episode proper adds a fourth. This sense of deception is ripped wide open by Laura Palmer's death, since - in fine mystery story tradition - pretty much every character is a potential suspect. It works as a disruptive influence, throwing the characters up in the air and allowing the audience to encounter them one-by-one via Cooper and Truman.

It is an unusually large cast as well, and one of the real strengths of the pilot is the manner in which it introduces a lot of them without the audience ever feeling particularly confused. The cast are generally quite distinctive as well. We can examine them in more detail in future episodes, but it is worth kicking off with a look at Cooper and Truman.

Truman, played by Michael Ontkean, is your traditional "Watson": he walks alongside the clever detective, asking appropriate questions and looking suitably impressed as the detective's insight is revealed. Ontkean does a genuinely great job of it: it's easy in a series this eccentric to appeal rather dull and ordinary, but his understated and naturalistic portrayal works as a grounding device for some of the more personality-heavy characters.

That brings us neatly to FBI Special Agent Dale Cooper, played with glorious enthusiasm and brightness by Lynch regular Kyle MacLachlan. He is an absurdly upbeat and happy character, one who details his life moment-to-moment via dictaphone to the mysterious "Diane". We never meet Diane, by the way - I like to think it's Cooper's name for the dictaphone. He is inordinately impressed with coffee and pie, and feels like a man that has stepped out of the 1950s and straight into 1990. In combination the characters are tremendous, and both Ontkean and MacLachlan do a tremendous job bringing their partnership to life.

The tone of the series is really quite difficult to pin down, and is the most likely element to turn away many viewers who try the show. It deliberately jumps back and forth between drama and comedy. The comedy is odd and absurd, with plenty of eccentric characters and dialogue fixated on the minutiae of life. The drama, however, is also absurd. In the opening scenes, as news of Laura's death spreads through the town, we see everyone crying. That her parents collapse in tears is to be expected, and is her best friend Donna (an impressive Lara Flynn Boyle). The school principal (Troy Evans) seems less expected, and police deputy Andy (Harry Goaz) just feels weirdly out of left field. It is unclear how the audience is supposed to react, since it all seems so over-the-top. That discomfort in viewing the scene - and many others as the series goes on - is, I think, a key to the show. If you view the discomfort of the tone as a fault, Twin Peaks will never be the show for you. If that awkward middle-ground becomes one of the reasons you like Twin Peak, then it's safe to say this is going to be one of your favourite shows.

I am never going to successfully review this series: it is simply too distinctive and off-kilter to encapsulate like an episode of Star Trek. I'm planning to simply make some observations on an episode-by-episode basis, and simply encourage you to watch or rewatch this wonderful series whenever you are able.
Posted by Grant at 8:14 AM