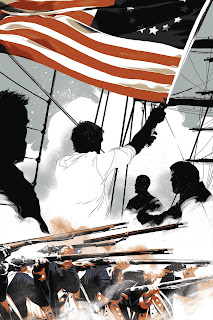 Brian Wood and Andrea Mutti continue to do a wonderful job with Rebels: These Free and Independent States, a five-issue miniseries that follows on from their original monthly series from a year or two back.

It is a great series in part because it has such a rich historical background: a young United States of America being forced to defend its shipping lanes from French and English incursions. It is also great because it has such a strong and interesting protagonist: John Abbott, a highly talented ship-builder and engineer who also appears to be autistic. He does not care about family or romance or even the nation he helping to build: all he cares about are his ships.

Andrea Mutti's artwork is simply stunning, with a realistic style and a beautiful attention to detail. The realism is aided enormously by Lauren Affe's colours, which are deliberately muted in shades of grey, brown and green for the most part. It all gives a wonderful sense of the past, and of American history.

If this miniseries format is a long-term future for Rebels, it is one I welcome. There is so much potential for different aspects of American history to be showcased and explored in this exemplary fashion. This issue, for one, is a near-perfect exploration of history with a great script, a wonderful lead character, and remarkable artwork. (5/5)

Under the cut: reviews of The Power of the Dark Crystal, Action Comics and Detective Comics.

The Power of the Dark Crystal #3

Perhaps it is the fairly obvious direction this issue takes, or perhaps the novelty value of new Dark Crystal is wearing off, but issue #3 of this comic book sequel lacks the spark of the previous two installments. The crystal has been fractured once again and the Skeksis have returned, which is entertaining enough, but there is little here that surprises. There was a Henson-esque sort of magic to the characters and the story that has slipped a little bit. Still we are only one-quarter through the story; hopefully issue #4 will show an improvement and match the enormous promise with which this series began. (3/5)

Superman's enemies have joined together in an attempt to kill him once and for all. This issue sees the Cyborg Superman and the Eradicator attempt to break into Belle Reve Prison to retrieve General Zod to their cause. There is a small extent to which this feels like the sort of Superman storyline a teenager would develop, but at least for this issue there is some nice action as the villains attempt to breach a mysterious black energy barrier with Superman in hot pursuit. It is not exceptional stuff, but it is enjoyable. (3/5)

Spoiler has returned, still on a quest to remove Batman and his allies from Gotham's crime-fighting landscape, and attempting to take down third-tier villain Wrath without the public knowing a vigilante hero was involved. It is an interesting story angle in some respects, but in others it is just setting the character up for failure: Batman is never going to stop being a superhero, and one supporting character (with a very small, keen fanbase) fighting against that clearly isn't going to go anywhere. As seems to be the way this week, this issue is enjoyable but unexceptional. (3/5)
Posted by Grant at 8:59 PM