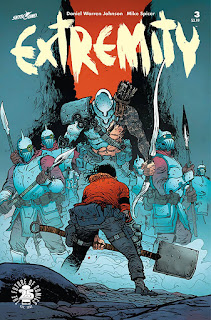 In the shattered remains of a once technologically advanced civilization, a roaming group of survivors work to enact their revenge against the empire that decimated their community. For traumatised artist Thea, further details of her past are revealed while she gains a chance to personally take revenge against one of the soldiers that cut off her hand.

Extremity is one of the best American comic books on the market. It is a realisation that took three issues to properly dawn on me, but as the shape and tone of the series has become clearer its immense merits have been cast into sharp relief. This is a hugely imaginative and brilliantly developed blend of science fiction and fantasy, one rather reminiscent of Hayao Miyazaki's Nausicaa of the Valley of the Wind yet still distinctive and packed with original angles and ideas.

More impressive still is that it's essentially the work of one creator: writer/artist Daniel Warren Johnson, who infuses his artwork with a real sense of energy and motion. Mike Spicer's colours and wonderfully complementary, sealing off an outstanding creative package. We're only a third of the way through the year, but I will be very surprised if Extremity doesn't stand as one of 2017's very best titles. (5/5)

IDW's big Ghostbusters crossover continues, albeit very slowly. The two parallel universes of the original and reboot Ghostbusters still have not actually met each other, and more time is spent setting up Peter Venkman's new money-making venture than in actually uniting the casts and playing on their interactions. Surely that's why everyone is reading this miniseries? It's okay stuff in its own right, and certainly Erik Burnham continues to nail the characterisation of the Answer the Call gang, but I was expecting something with a more immediate return. (3/5)

Dean, the deeply unlikable housemate of McGraw and Ed, is in love up to his neck. That makes this issue a little problematic, because in all honesty I don't care that irritating Dean is getting taken for a ride by a steampunk-wearing high-spending young woman. There are some funny jokes, but this month it all feels a little flat - as if writer John Allison himself is not that engaging in Dean's plight. It's still entertaining, it's still well illustrated and coloured, it's just not a patch on Giant Days at its best. (3/5)

A supply issue prevented me from reviewing issue #3 until now, so I may as well review both issues #3 and #4 simultaneously, since their quality is pretty consistent from one to the other. Imagine setting up a colony on an isolated and challenging planetoid. Imagine all the sacrifices made, and difficulties overcome. Now imagine a generation passing, and find that while you've been stuck down on your planetoid interstellar wars up above have been resolved, civilization has moved on, and now a massive corporation has bought your planet out from under you without your knowledge. This is smart, well developed science fiction that captures the contemporary relevance that marks all the good works in the genre. (4/5)

Poe Dameron takes a breather this month to serve up a well-timed and nicely paced epilogue for the first year's worth of stories. While the Resistance bury one of their own, First Order special agent Terex is taken into custody in disgrace - and has a fateful meeting with Captain Phasma. It's mostly great stuff, although a weird foreshadowing by Princess Leia of her impending death feels just a tiny bit misguided and tacky. My previous concerns about this book still stand - Poe is, all things considered, an under-developed protagonist - but this issue at least is pretty great. (4/5)

Another one of Brian Michael Bendis' set-up issues will impress those who adore his slow writing style, and frustrate those who are just keen to see a fast, energetic Spider-Man comic. Black Cat continues to battle an unknown rival, and that's surely going to open up into a story arc real soon now. Ganke gets closer to the vlogger who has been tracking Miles' activity as Spider-Man, and that looks suspiciously like he's being taken for a ride. Miles beats up an entire bar full of people by accident, as well as continues to struggle with his mother's shock as his being a superhero. Things move, but in little increments, and while the character work is great the treacle-like story momentum continues. (3/5)
Posted by Grant at 9:34 AM