Star Trek: The Next Generation: "The Chase" 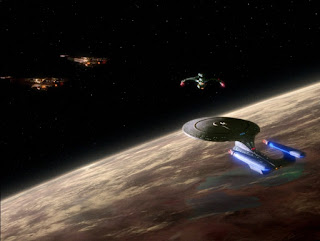 It is 26 April 1993, and time for another episode of Star Trek: The Next Generation.

Captain Picard (Patrick Stewart) is urged by his own archaeology professor to abandon his Starfleet career and join the expedition of a lifetime. When that professor is killed shortly afterwards, Picard commands the Enterprise to investigate his discovery. It leads him on a planet-to-planet race against the Cardassians and the Klingons to gain an ancient secret from billions of years in the past.

"The Chase" takes a huge series-transforming concept and then attempts to tell it in the space of a self-contained 42-minute episode. That is a mistake on several fronts. For one thing the central concept that is revealed seems to demand a follow-up or further exploration, and gets none. For another the quest-like narrative turns the episode into a series of quickly expressed events rather than an actual story with weight and emotional resonance.

"The Chase" is, ultimately, a big long chase and little else. Picard's former mentor, Professor Richard Galen, is killed on the verge of his greatest discovery: that the DNA of species across multiple worlds seem to interconnect to reveal some sort of data from a billions of years-old civilization that predates all other known sentient races in the galaxy. It's a huge idea, and by the time the various parts of the puzzle are collected and correctly ordered there is barely enough time to showcase a holographic message from one of the galaxy's progenitors before the episode has run out of time.

The problem is that it is all busy work. The Enterprise rushes from one star system to the next, has confrontations with Cardassians, Klingons and Romulans, but never seems to find the time to explore the gravity of the information revealed or to properly explore its effect on the characters. Picard for one loses a mentor, and you would hardly know it from the matter-of-fact way he goes about continuing Galen's research.

There are a few interesting elements. For one thing it is rather striking to see so many different Star Trek races on screen together for the first time. We also get to see the first-ever female Gul from the Cardassian Union: Gul Ocett, played by former Avengers star Linda Thorson. The ancient humanoid revealed in the climactic message is played by Salome Jens, who will appear numerous times as the Female Changeling in Deep Space Nine. St Elsewhere alumnus Norman Lloyd is weirdly exaggerated as Professor Galen, and is not given sufficient time to demonstrate a relationship with Picard.

This is an episode that would have benefited from being a two-parter, just to enable the ideas to be explored and the characters to be fleshed out. Instead it winds up being all movement and plot without finding space to tell a proper story. It is a rather disappointing failure. 20 episodes into Season 6, and 13 of them have been good. The quality ratio slips a little to 65 per cent.
Posted by Grant at 8:56 AM