Star Trek: The Next Generation: "Frame of Mind" 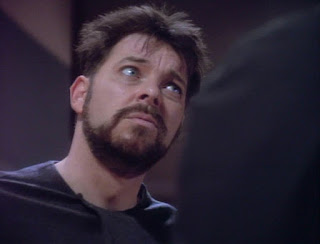 It is 3 May 1993, and time for another episode of Star Trek: The Next Generation.

"Frame of Mind" is a trippy paranoid thriller, and a sharp change of tone and pace from its preceding episode ("The Chase"). It shines a spotlight on Commander Riker and puts him through pronounced psychological torture. That his mental instability is all some kind of alien ruse is never really in question, but the manner in which the story plays out remains enormously impressive.

To an extent the episode does feel a little like the series has been here before. We have seen Riker be captured on an away mission before in "First Contact", and we have also seem him struggle to escape a virtual reality designed to fool him into complacency in "Future Imperfect". In some ways "Frame of Mind" feels like a combination of the two earlier episodes, but in practice it is a much more paranoid and effective piece of work. The manner in which it just back and forth from hospital to starship is well staged, and the pacing is very strong.

To be honest it all does feel a little too much for Jonathan Frakes, whose more manic moments do seem to bring in a fair amount of 'crazy eyes' and exaggerated movements. In the smaller moments he is much more convincing. Guest star David Selburg is excellent as the alien psychology Syrus, who ostensibly attempts to help Riker understand his mental illness and encourages him to admit his Enterprise life is an illusion created in his mind.

The use of a Kafka-esque play rehearsal around which to base the delusions is a clever one, and leads to some excellent scenes of hallucinations and general paranoia. That said, the Enterprise bridge crew's constant fascination with amateur dramatics bears further examination. Given their disparate personalities it seems a little strange that on a starship of roughly 1,000 people it's the highest-ranking officers who seem to spend all their time putting plays together to entertain their crewmates. On the other hand, it is a remarkably sweet bit of oddness that has slowly emerged within the series.