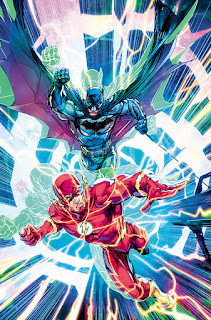 "The Button", the DC Universe's next step in combining their characters with Watchmen, continues in The Flash #21. In the aftermath of the Reverse Flash's unexpected return and sudden death, Batman and the Flash go into forensics mode. It's a great creative move, finding a common ground between the two characters and exploiting it well for this story. The clues drive the Flash to pull the famous 'cosmic treadmill' out of storage, and before long he and Batman are on their way to a parallel universe.

This is huge issue for fans of DC's tortured and lengthy continuity, with some pretty major foreshadowing for the future of the line and a chance for a face-to-face meeting that's been hiding in the wings since Flashpoint back in 2011. Joshua Williamson writes a great script here, and Howard Porter does a fine job of illustrating it - he's always been one of my favourite DC artists.

The first instalment followed up on Saturn Girl's incarceration in Arkham, and this second part returns to former JSA member Johnny Thunder raging against a storm above an old folks' home. There is a very strong sense of set-up going on here too, for future DC books and certainly the proper return of such much-loved characters. I remain deeply concerned about the Watchmen elements, but as a hardcore DC fan this storyline is increasingly pressing all of the right buttons. (4/5)

Under the cut: reviews of Detective Comics, Hulk, Joyride and X-O Manowar.

Fans of Cassandra Cain will be very pleased to see her take the limelight this issue. This is, ultimately, her story arc. It is a textbook example on how to write the penultimate issue of a comic book storyline: everything seems doomed, the protagonist has lost faith in herself, and then magically it all swings around to an uplifting climax that makes you want to punch your first in the air. Strong story, strong artwork, great characters: Detective Comics is on a real run this year. (5/5)

Jennifer Walters almost died during Civil War II. Now she's working as a lawyer with her crime-fighting days behind her. When trying to help a young shut-in bullied by a landlord, Jen discovers a giant black monster committing murders on the girl's behalf. Now Jen's attempts to help have made her a target of that same monster. This is a strong, deeply emotive comic book about grief and trauma, which understandably may not be every reader's cup of tea, but it's beautifully written and really captures some dark, bleak emotions very well. It's pretty much the opposite of your average She-Hulk comic, but all the stronger for it. (4/5)

The Earth is about to be destroyed. An alien warfleet stands in orbit preparing to incinerate the entire human race. Humanity's only hope are four young human runaways returned from their interplanetary adventure. This is a great climax to what has been a sensational series. I did not realise until the last page that this is indeed the final issue of Joyride, a book I have enjoyed enormously over the past year. It ends perfectly; while I'm sad to see it go, I can see why its creators chose to end it here. Science fiction adventure fans: go out now and get this series in trades. It is more than worth it. (5/5)

Trapped in an alien war zone, Aric is forced to lead a small squad of soldiers into the Cadmium base. This is exceptional science fantasy, with swords and shields, aliens, spaceships and - in the centre of it all - a reluctant and tired warrior from ancient Earth. There is still much to be answered about why Aric is where he is, and this issue certainly hints at some past tragedy. Tomas Giorello and Diego Rodriguez have collaborated to produce jaw-dropping artwork. Fans of the old Conan the Barbarian comics are going to be in heaven with this one. Anybody wanting to get into Valiant's line of books: this is the perfect opportunity. (5/5)
Posted by Grant at 5:05 PM