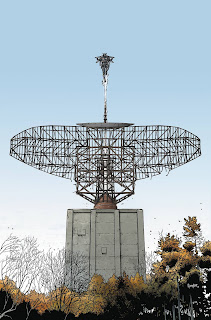 Angela Spica has a robot suit inside of her body that pours out whenever she is in trouble. She appears to be in a lot of trouble with two secret high-tech agencies hunting her down and murderously fighting each other over who gets to grab her. There is a lot of other stuff getting thrown at the reader in The Wild Storm, but thankfully that central conceit is enough to handle for now. Everything else is just washing over me.

It is a mark of how effectively Warren Ellis can develop a story that I can find myself surrounded by too many characters referencing too many names without context, but still find a tremendously entertaining story being told. The effect is rather like being thrown into white-water rapids: sure you're probably drowning, but it sure as hell seems exciting at the same time. More experienced readers of the old Wildstorm universe are probably going to spot and understand a lot more here than I am, but what I am seeing is some fantastic and immersive world-building.

Jon Davis-Hunt and Steve Buccellato are doing sensational work with the art. It is a clean, very neatly composed world of sci-fi tech, that reminds me a little of The Manhattan Projects but with a much less exaggerated style.

This book is taking its time, but it was announced from the outset as a self-contained 24-issue story, so to be honest I have no problem with that. Right now, I'm just trying to keep my head above water and enjoy the view. (4/5)

Under the cut: reviews of Batwoman, Night Owl Society, Poe Dameron, Satellite Falling and a much-delayed review of Hadrian's Wall.

Batwoman's investigation of her missing mentor Safiyah on the renegade island of Coryana is taken up a notch as she investigates the criminal Kali Corporation. The plot develops nicely in this issue, with some matter-of-fact but effective illustration by Steve Epting. There is also a nice element of snark to the book, with Kate and Julia's banter really developing into one of Batwoman's highlights. 'Creepy twin bingo' is a particularly nice touch. I feel with each issue this book gets a little more sure of itself, and a little more entertaining. It's good to see. (4/5)

Teenager David has assembled a group of like-minded schoolmates to help him take down a local crime kingpin - without telling them that the kingpin in question is his own father. Long-time readers of this column know that I prefer books with a large number of panels per page, since it tends to create more story than those with big splash panels and the like. Night Owl Society pleases me immensely in this regard, with a densely plotted story that takes in as many as 16 panels per page. The story progresses really well. To a large extent this feels like it shares a similar territory to 4 Kids Walk Into a Bank, but to its credit this book has a distinct and much darker tone of its own. One other thing it has in common is its quality: with two issues down this is really shaping up to being a must-read book. (5/5)

Poe Dameron is sent on an urgent mission to secure fuel for the Resistance, only to stumble into a trap set by the First Order. It is actually a pretty clever trap, and one that allows Charles Soule to develop an exciting and action-packed new storyline. As with most of Marvel's Star Wars artists Angel Unzueta takes a fairly realistic route, in this case relying a little more obviously than most on photo-referencing the film actors. For Star Wars fans this is solidly entertaining stuff. (3/5)

There was a huge delay between issues #3 and #4 of Satellite Falling; it is great to see there hasn't been a delay between issues #4 and #5. With Eve's xenophobic masterplan revealed, there's just time left for Lilly to make a last-ditch attempt to save all the non-human species of the galaxy. This is an excellent final issue, combining a tense climax with a very well-written epilogue that does that neat trick of ending the story while leaving a door open for a future sequel. I rather hope there will be one: the characters are good, the design work is inventive, and Morazzo's artwork is beautifully detailed. Alex Lozano's colours are gently and supportive, enhancing Morazzo's line work without overwhelming them. (4/5)

One to add to the 'took me weeks to track down a copy' files. Originally published back on 26 April, this issue picks off after the Hadrian's Wall, a starship out into our solar system, was taken over by anti-Earth rebels, interrupting Simon's murder investigation. All signs point to his ex-wife Annabelle being the murderer, but Simon no longer appears to think so - and a much bigger problem has just loomed on the immediate horizon. This is a great science fiction thriller with a wonderfully flawed lead character and a distinctive manner of representing his growing drug withdrawal as the series has progressed. Now he is fully hallucinating the talking corpse of the murder victim - not just his ex-wife's second husband, but a man who tried to kill Simon himself. It's complex stuff, and Rod Reis and Eduardo Ferigato's artwork is wonderfully detailed and atmospheric. This continues to be one of the best books of the year. (4/5)
Posted by Grant at 9:44 PM