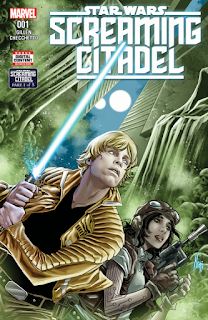 Doctor Aphra, the rogue archaeologist introduced in Marvel's Darth Vader, has certainly made an impact with fans. Not only did she get her own follow-up series, and not only did she just get voted to receive her own 4-inch action figure in 2018, but now she gets to co-star in a special new crossover event The Screaming Citadel, teaming her up with a pre-Empire Strikes Back Luke Skywalker.

Aphra finds Luke on the Outer Rim, and entices him to join her on a mission to the 'Screaming Citadel', the palatial home of the mysterious Queen Ktath'atn. Luke thinks it may enable him to meet a Jedi Master. Aphra clearly has a secret motive of her own. The mysterious Ktath'atn appears to be a space vampire.

This is Star Wars as gothic horror, a creative move that may seem a little risky, but which dances along merrily thanks to an excellent script by Kieron Gillen and incredibly strong artwork by Marco Checchetto. The story continues across Star Wars and Doctor Aphra over the coming weeks - based on the opening chapter, it is set to be a sensantional read. (5/5)

Under the cut: reviews of Copperhead, Detective Comics, Doctor Who: The 11th Doctor and Silver Surfer.

The mystery into who murdered Copperhead's mayor continues. The cliffhanger from the previous issue is resolved in an oddly weak fashion, and to be honest the issue never quite recovers its A-game. The main storyline feels a little too derivative, and the growing subplot regarding Clara's criminal ex-husband is really beginning to drag on. The characterisation feels off as well; I am hoping it's all going to lead to some kind of stunning reveal, because as it stands the quality of Copperhead is slipping uncomfortably. (3/5)

"League of Shadows" hits the grand finale as Cassandra challenges her mother face-to-face, and Shiva sets the countdown running on a thermonuclear weapon. It is all relatively predictable stuff in the main, but then the surprises all happened in earlier issues: this is just the climax. It is pleasing to see the last few storylines are all ultimately linked, and that they have effectively been setting up whatever happens next for Batman and his team. Marcio Takara's artwork is chunky but surprisingly effective. (4/5)

Doctor Who: The Eleventh Doctor #5

The third year of the 11th Doctor's comic book adventures is just failing to hit the sweet spot attained by its immediate predecessor. Last year's series told a large-scale epic story with a great use of series continuity. This year just feels like the proverbial 'dog's breakfast'. It is all over the place, and each individual issue seems more likely to fall flat that create a positive impression. This particular issue feels oddly rushed. You can feel it in the under-developed story and I.N.J. Culbard's uncharacteristically bland artwork. (2/5)

A great comedic issue, as the Surfer and Dawn desperately attempt to race back to Earth in time for her sister's childbirth. The only problem is that there's a diabolical and incompetent alien trying to have a violent showdown with the Surfer first. This is a wonderfully silly, emotionally warm issue that follows it all up with a hugely emotional ending. When this book doesn't work, it tends to grate quite badly. When it does work, it damn well sings. This is my favourite comic book of the week. (5/5)
Posted by Grant at 7:52 AM