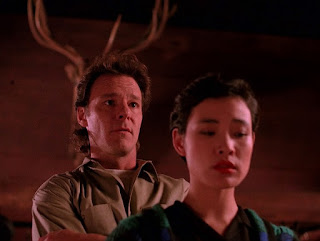 Season cliffhangers were a popular technique in American television at the start of the 1990s: get the audience on the edge of their seats and then leave them hanging desperately over the Summer months before the series can make a widely hyped return in the Fall. Twin Peaks engages in a cliffhanger as well, but it does so in a typically self-aware, ridiculous and over-the-top fashion. I am not sure any other American series has developed a cliffhanger with so many characters' welfare at stake.

Let us summarise all of the cliffhangers for the episode.  Dr Jacoby (Russ Tamblyn) is struck from behind by a masked assailant and appears to have a heart attack. Attempts to arrest Jacques Renault end with Renault being shot, and he is then smothered with a pillow in the hospital by a crying Leland Palmer (Ray Wise). Audrey (Sherilynn Fenn) is successfully hired as a sex worker for One-Eyed Jacks, and realises her first customer is going to be her unwitting father Benjamin - whom she has just discovered owns the entire casino and brothel. James (James Marshall) is framed by Bobby for drug possession. Shelley is tied up by Leo in the sawmill, which he then sets on fire with her and Catherine inside. Leo then tries to kill Bobby, but is instead shot through the chest by Hank Jennings (Chris Mulkey). Nadine Hurley (Wendy Robie) attempts to commit suicide. In the episode's final moments Agent Cooper opens his hotel door and gets shot three times.

Once again the series is engaging in knowing parody of soap opera conventions. It is not enough to end the season with one character in jeopardy; instead Twin Peaks settles on ten. It is ridiculous, but that is the whole fun of the series.

Some solid plot develops here as well. Jacques Renault, unaware that Cooper is an FBI agent, fills in critical detail of the night Laura Palmer died, including his and Leo Johnson's tying her up and assaulting her. The mystery of the poker chip with a bite taken out of it is solved, but while it implicates Renault and Johnson in assaulting Laura it neither condemns or exonerates them over her murder. When Renault attempts an escape, and grabs an officer's gun, there is a nice callback to early episodes when it is Andy (Harry Goaz) who shoots Renault in the shoulder. Back at the police station he also momentarily makes up with Lucy (Kimmy Robertson), who spontaneously announces she is pregnant.

We finally learn the connection between Hank Jennings and Josie Packard (Joan Chen): she paid him to murder her husband, and he then killed a pedestrian in his car to go to prison and escape suspicion for the real intended crime. Tied in with the previous episode's revelation that it is Catherine who is the target of Benjamin Horne's sawmill purchase and not Josie, this whole corner of the series has managed to become a lot more interesting.

And then somebody shoots Dale Cooper. It's a classic cliffhanger ending to a really satisfying episode. This is the only episode of the series to be written and directed by Mark Frost. He handles the entire affair with a steady dramatic hand, and that ultimately gives it a much more conventional style than Lynch's episodes. Altogether it is a pretty wonderful conclusion to the first season.

Something that becomes apparent as you watch the season is that each episode pretty much takes place over one day. That means that after nine hours of television, Laura Palmer has only been dead for a little over a week. So much has happened in that time.