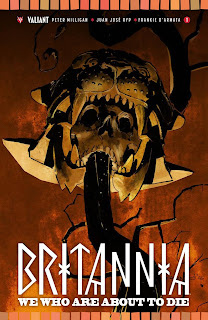 Antonius Axia is a Roman investigator that has been granted knowledge of the Codex, a mystical text that has given him great insight into the minds and motivations of humanity. His latest case sees him looking for young Romans reportedly joining a cult - only to stumble upon the site of a horrifying massacre in one of the city's temples. Dispatched to investigate by both Emperor Nero and the Vestal Virgins, Antonius' path takes him to the gladiatorial arena - and a very unexpected gladiator.

Britannia was a beautifully packaged four-issue miniseries of Roman history and graphic horror, packed with blood and gore and nice pieces of historical detail. It was an odd book for Valiant to publish, since it did not really line up with their shared superhero universe at all, but with Peter Milligan's entertaining writing and Juan Jose Ryp's excellent artwork it really won me over.

Now there's a sequel miniseries in the offing. Based on this first issue, Milligan and Ryp are onto another winner. The same dark tone and graphic violence is there, and the setting has shifted from the wilds of Britain back to Rome itself. If detective-horror in Ancient Rome sounds like your kind of comic book, you should absolutely check this series out. (4/5)

Britannia: We Who Are About to Die #1. Valiant. Written by Peter Milligan. Art by Juan Jose Ryp. Colours by Frankie D'Armata.

Under the cut: reviews of Action Comics, Archangel and Batgirl.

Superman continues to re-examine his new history, while a group of super-villains are assembled to defeat him. This all makes for a pretty boring storyline so far. We're now two for two in watching a mysterious enemy assemble a bunch of villains, and Superman going through a series of very brief, sketchy flashbacks to basically let readers know which old storylines are in and which are out post "Superman Reborn". As far as I can make out, Grant Morrison's wonderful 'jeans and t-shirt' Superman now no longer happened, which seems a shame. Anyway, this issue is pretty dull and redundant: hopefully something will happen next time around. (2/5)

Our reality is getting hijacked by the political masters of a parallel universe, who are now armed with a nuclear weapon to bring their grand plan to fruition. It should be no surprise that William Gibson - one of the world's finest writers of science fiction - has created a fantastic time travel thriller with Archangel, one packed with intelligent dialogue and strong characters. Butch Guice and Alejandro Barrionuevo are well suited to the material as well, serving the story rather than competing with or overpowering it. So far this series seems to have been flying under the radar with literary SF fans - with any luck the inevitable collected edition will be more popular. (4/5)

Batgirl has a one-on-one confrontation with the Penguin before returning her focus to his son Ethan Cobblepot, whose social media apps seem purpose-built to enable his criminal enterprises. I've really enjoyed this storyline. I've noted in earlier months that it has been a huge jump in quality from the first five or six issues, and each succeeding month has solidified that quality. I'm particularly impressed by Chris Wildgoose and Jon Lam's art, which a nice upbeat style that matches the tone of the characters really well. (4/5)
Posted by Grant at 8:00 AM