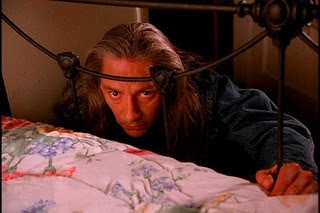 It is 12 April 1990, and time for the first regular episode of Twin Peaks.

One of the great achievements of Twin Peaks' early episodes is the sheer number of characters that the series throws at the viewer without ever coming across as overwhelming or confusing. This first post-pilot episode juggles numerous plot threads, all of which may be related to Laura Palmer's death, and also undertakes the impressive task of interrelating half of them. It is actually quite easy when in the thick of all the different threads to overlook how carefully and slowly the episode is paced.

Something that quickly becomes clear from this episode is that Twin Peaks is not simply a murder-mystery to be solved. The series is ultimately more interested in playing with the conventions of soap opera. This intention is obvious from the broad cast of domestic characters, each of which is struggling with their own particular problem. Laura's ex-boyfriend Bobby (Dana Ashbrook) owes $10,000 to Leo for an undisclosed reason - although the heavy implication is that it is drug-related. Shelley is suffering serious domestic abuse at Leo's hand. Truman is having an affair with Josie, and Josie is facing a potential hostile takeover by her dead husband's resentful sister Catherine (Piper Laurie), and Catherine in turn is having an affair with hotel and department store owner Benjamin Horne (Richard Beymer). Meanwhile Laura's secret boyfriend James is falling in love with Laura's best friend Donna (Lara Flynn Boyle), and she with him. Meanwhile psychiatrist Lawrence Jacoby (Russ Tamblyn) is revealed as the man whole stole Laura's buried necklace, and is seen crying while listening to a recording she sent to him.

There is simply so much going on at the same time that the resemblance to soap opera is unmistakable. It is also evident in Angelo Badalamenti's iconic score, which turns out to involve just three composions swapped back and forth for 45 minutes.

One of the actors who makes a very strong impression in these early episodes is Lara Flynn Boyle. Like Michael Ontkean as Truman, she plays her role in a very naturalistic fashion and avoids the temptation for eccentricity or over-acting. It makes her character much more likeable, and she does some really strong work with what is a deliberately archetypal character.

It is also important to note Sarah Palmer's momentary vision of the creepy and dishevelled man inside her house. It comes completely left of field, and is a somewhat shocking moment of horror as a result. It goes unexplained for now, but it the first really solid hint that Twin Peaks is not going to be the most ordinary and realistic of dramas.
Posted by Grant at 5:26 PM