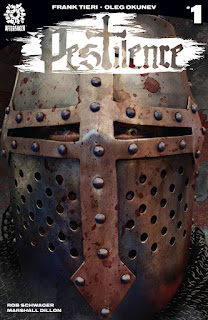 In the 14th century the Papal assassin group Fiat Lux - led by the mercenary Roderick Helms - uncovers a new scourge threatening to devastate the whole of Europe. Not the Black Death, as history might suggest, but a continent-wide zombie infestation.

There is a weary sort of 'been there, done that' vibe to Pestilence. Its story beats feel worn-out and overly familiar, and there is nothing in this first issue that leaps out and suggests any sense of originality or invention. It is also unremittingly bleak and unpleasant, with plenty of graphic violence of both a physical and sexual kind. Naked women are used as decoration, and the paper-thin characters feel trite and under-developed.

I genuinely hate writing reviews like this: comic books take enormous effort and talent to assemble, and in all fairness there is likely some kind of audience for this kind of violent medieval gore horror. Sadly I am not that audience, and this first issue of Pestilence left me deeply disappointed. (1/5)

With the threat from Dead Water becoming too dangerous to bear, and with a hacked nuclear device ticking down to an enormous explosion, Aquaman takes matters into his own hands - and makes a choice that puts him at odds with Mera. This entire "H2.O" storyline has felt a little perfunctory to be honest, with most issues doing a bare minimum to tell an entertaining story without ever really exploiting its potential. Last issue was a noticeable exception, throwing in a particularly great idea with enormous future potential - Aquaman exploring an ocean planet - but this finale just wraps things up and puts them away. It's a shame. (2/5)

"The Button" continues, as Bruce Wayne comes face to face with his own father Thomas in the ravaged and collapsing world of Flashpoint. While it is great to see two generations of Batman fighting together against the forces of an alternative timeline Wonder Woman and Aquaman, this issue really does not do a great deal to illuminate what is going on, the significance of the Watchmen button, the circumstances of changes to DC Universe history, or indeed the identity of the force that has meddled so egregiously with the universe. Good art, solid writing, but it all feels like padding. (3/5)

If you are looking for a large-scale apocalyptic kind of superhero story, then Green Arrow has you covered. The Ninth Circle has secretly taken over the city of Seattle via business and government, and now has enacted the first stage of its plan to shatter the city to pieces. Meanwhile Ollie and Dinah are fighting, and Arsenal continues to sit the conflict out. Juan Ferreyra's artwork is, as always, rich and evocative, and Benjamin Percy is doing a great job of pulling together multiple threads from the previous storylines of this book. It's another great issue for one of DC's best monthlies. (4/5)

Speaking of pulling together multiple threads, it is outstanding watching Peter J. Tomasi and Patrick Gleason tie up characters and events from the previous 21 issues and reveal a hidden storyline that unites them all into one unexpected and dramatic trap. On top of that, we get a sensational prolonged action sequence as Lois Lane uses her own ingenuity and a stolen Batman gauntlet to take on a horde of enemies at once. It's well paced, action-packed, and presents one hell of a surprise for Superman readers. (4/5)
Posted by Grant at 5:10 PM