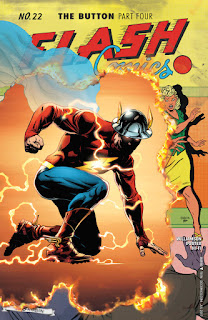 After being hyped as the next great step forward for DC Rebirth, the Batman/Flash crossover "The Button" has wound up being more of a four-issue tease for a miniseries coming in November. That's the sort of bait-and-switch shenanigans that that really irritates. Rather than introduce any new developments it simply re-emphasises one the readers already know: that someone, most likely Dr Manhattan from Watchmen, has manipulated the history of the universe, that former DC Universe heroes are trapped in time and can only be freed via a close personal connection with someone already in the revised timeline, and that there is going to be a Watchmen/DC Universe crossover soon.

Some readers will be thrilled to see the return of original Flash Jay Garrick for an issue. I was more annoyed by how this widely promoted four-issue arc gave a lot of vague gesturing at continuity references and DC Universe history without providing a very satisfying story.

And the epilogue just irritates. No matter how much portent and gravitas DC shoves into their upcoming crossover, it will take a monumentally clever miniseries to overcome just how bad an idea exploiting the Watchmen characters is. Bad in terms of creativity, and bad in terms of respecting creators and artists. (2/5)

Under the cut: reviews of Daredevil, Freeway Fighter and Superman.

It has felt like an interminable wait to discover the story behind nobody knowing Daredevil's secret identity any more, and with the 20th issue it finally comes around. In the broad strokes it is relatively predictable. In the smaller details it is heartbreaking, particularly the revelation of why Matt Murdock's girlfriend Kristen McDuffie is no longer in his life. Ron Garney and Matt Milla continue to provide strong, moody artwork. The emotion here is great, but I am glad the book can now move forward. (4/5)

Now here's an unlikely inspiration for a licensed comic book: Ian Livingstone's Freeway Fighter, a 1985 multiple-choice children's book (or 'gamebook') published as part of Puffin Books' hugely successful range known as Fighting Fantasy. This first instalment is relatively slight in plot terms, relying on big panels to tell a fairly simple story. Simon Coleby's artwork has a wonderfully pulpy old-fashioned style to it that really compensates for the lack of plot. There's potential for quite a few comic books based on Fighting Fantasy - how long before Titan publishes Deathtrap Dungeon? - but for a start this is relatively promising. Post-apocalyptic fiction lovers should check it out. (3/5)

The truth behind Lois and Clark's adopted home town is finally revealed and, credit to writers Patrick Gleason and Peter J. Tomasi, it was not an explanation I was expecting - mainly because the characters involved are ones which I know vaguely but have never actually read. More experienced Superman readers may get a lot more out of it. There are some nice moments here, and some beautiful art by Doug Mahnke, but the ending has actually thrown me a little. I am not sure where the story is going from here. (3/5)
Posted by Grant at 8:20 PM