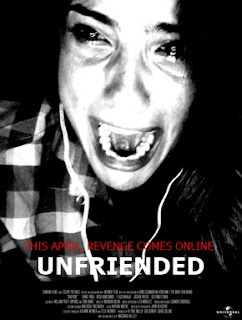 Six high schoolers connect via Skype, only to discover a faceless hacker has hooked into their call. No matter how hard they try to get rid of him or her, the hacker keeps logging back into their conversations. Then their Facebook accounts begin to get hacked, and then text chat, all sharing secrets and betrayals they would all rather leave hidden. It all seems to be linked to Laura Barns, a classmate who committed suicide a year earlier after an embarrassing video of her was uploaded to Youtube. Then, one by one, the high schoolers start dying.

Unfriended is a 2014 horror film directed by Leo Gabriadze and produced by noted horror movie production company Blumhouse. It falls loosely into the found footage genre I suppose, although its key selling point is fairly distinctive. The entire film - all 80 minutes of it - plays out on a single laptop screen, with the action taking place across Skype, Facebook, text chat and other forms of social media.

It is a challenging format for a feature film, since it requires quite a bit of patience and reading, and occasionally paying attention to more than one part of the screen at a time. In many ways it feels as if the format would have been better served in a shorter time frame, such as a segment in the VHS franchise, but despite a few fallow sections it is overall a pretty satisfying horror movie.

There is a nice progression in the film's earlier scenes, as it leads the audience into assuming the horror elements will be of the stalking/home invasion variety, before everything gradually turns toward the supernatural instead. While there is some often-times brutal violence, there is surprisingly little gore. Gabriadze shows enough to demonstrate what horrendous act is occurring, and then leaves the audience to imagine the rest.

The cast are pretty typical for a film in which a group of teenagers die one by one, but Shelley Hennig (Teen Wolf) is a particular stand-out. She plays Blaire, the former best friend of Laura Barns, and it is through her laptop that we see the story play out. While the remaining cast are not bad by any stretch, they are all a trifle generic. Then again, in this sort of film that is not such a tremendous handicap.

Some viewers will likely find the screen format of Unfriended rather difficult to sit through, but for those who can it is a fairly distinctive and entertaining short feature. As is always the way with hit horror movies, a sequel is currently in development. That does feel a little bit redundant.
Posted by Grant at 10:00 AM