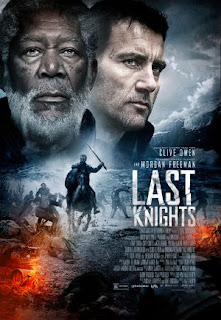 It is obvious from the key art used to promote Last Knights on home video that it is what industry types refer to as a 'europudding'. That is, it's a film project whose budget has been raised by a wide consortium of European screen agencies, financiers, and independent distributors. These kinds of patchwork arrangements inevitable result in a particular kind of movie. With so many different country markets to be catered for, there is usually a desire for action over dialogue - no mass audience likes subtitles that much - and predictable stories over inventive ones. European independent distributors seem to like period action films with plenty of sword-fighting, and each year you can find another few dozen of them released direct to home video and streaming without ever seen the inside of a cinema.

Keeping all those international funders happy also requires a pretty internationalised cast. That is certainly the case with Last Knights, which makes use of Morgan Freeman and Clive Owen as its stars and then adds in actors from New Zealand, Japan, South Korea, Norway, Israel and Iran, and I am certain many other countries. Get a semi-noted actor from as many countries as possible and you have a marketing hook in each of those countries. For the record, this is officially a United Kingdom/South Korea co-production.

The last feature of the europudding is that, generally speaking, they're rarely very good. Script quality seems to follow very distantly behind if the cast's names can sell the movie at a film market, or if there are plenty of action bits, and so on. That in mind, Last Knights is something of a surprise. I think it is really rather good indeed. It's that rare unexpected gem from the DVD library's weekly shelves.

The film is set in a curious unnamed country of multiple fiefdoms, all united under a single emperor. Clive Owen plays Raiden, the commander of a dedicated squad of elite swordsmen sworn to serve and protect the Lord Bartok (Morgan Freeman). The emperor's financial minister Geza Mott (Aksel Hennie) conspires to disgrace Bartok in the emperor's palace, resulting in not only Bartok's execution but the dissolving of his entire estate. One year later, Raiden and his band of masterless warriors reunite to murder Mott in revenge.

'Wait a moment,' some of the more widely-read of you might be thinking at this point, 'that all sounds suspiciously like the plot of The 47 Ronin, that famous Japanese story about the samurai pledged to a disgraced lord reuniting to assassinate the corrupt Imperial official who had him executed.' You would be correct of course. This is a surprisingly faithful adaptation of that legend, and certainly more faithful than the recent Hollywood version that featured witches, dragons and Keanu Reeves. Sure the story is no longer set in Japan, and sure the samurai have been replaced by an aggressively multicultural patchwork of nationalities living in a strangely non-specific medieval Europe,but the key plot beats and characters are replicated with surprising accuracy.

Upon noticing this I immediately had concerned about cultural appropriation: this is an innately Japanese story, and surely deserved to be told by a Japanese filmmaker. It was then that I noticed the film is directed by Kazuaki Kiriya, the Japanese director whose two previous films - Casshern and Goemon - impressed me with their strong visual imagery. I had always wondered why he had never made a third feature. It turns out he did, hidden away in the Czech Republic with Clive Owen and Morgan Freeman.

Armed with the knowledge of its inspirations and director, and Last Knights suddenly rises above its generic title and blandly European production. Stylistically this is a Japanese film through and through. Its lead characters value honour and duty above all else - including their own families. There is an inherent stoic quality to much of the cast, save for Aksel Hennie's hilariously over-acted villain. It is an overwhelmingly male film, with disappointed me a little. Since Kiriya had already thrown any sense of historical realism out of the window by using a multi-racial cast in a Japanese story relocated to Europe, why not take one further step and let a few of the warriors be women too?

Kiriya employs a very bleak look for much of the film, with grey buildings and soldiers all costumed in black. When there is finally a bit of colour during the climax it pops off the screen. It is a strong climax too, well earned by the film beforehand and featuring a superb one-on-one sword duel between Owen's Raiden and Tsuyoshi Ihara's noble warrior Ito. I have always been a fan of Clive Owen, and it was sad to see a combination of bad luck and poor project choices pretty much ruin his chances of a big Hollywood career. Morgan Freeman seems a little less impressive here; it is not that he does not give a good performance, it is simply that of the entire cast he is the one who feels most out of place.

This is not a perfect film, but I do find it a perfectly enjoyable one. It really slipped under the radar: trapped in a sort of distribution hell for a few years after it was produced, thrown out without fanfare and pretty savagely beaten by the critics who bothered to review it. I honestly think a lot of those critics misjudged it. There is a really interesting film here. It has faults, and not all of it works, but it is absolutely worth checking out.
Posted by Grant at 9:45 AM