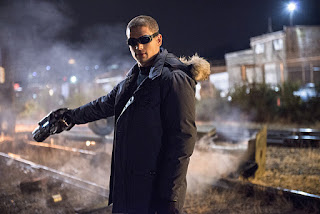 After foiling the attempted robbery of an armoured truck, Barry (Grant Gustin) makes an enemy of career robber Leonard Snart (Wentworth Miller). When Snart comes into possession of a super-powered freeze ray, Barry finds himself with a real challenge on his hands - although Felicity Smoak (Emily Bett Rickards) has arrived to lend a hand.

Of the four episodes of The Flash so far, "Going Rogue" is by far the one that most resembles a comic book. It does this by employing two fairly key tropes of the medium. Firstly, it features a crossover character from another title. In this case Felicity pops over for a week from sister series Arrow. Secondly, it introduces the series' first fully-fledged super-villain in the form of Leonard Snart - aka Captain Cold.

Having started The Flash without watching more than a few minutes of Arrow, it is a little strange to have a supporting character introduced with the absolute assumption by the production team that all viewers will know who Felicity Smoak is. She appears to be some kind of computer expert who helps out Arrow, and I am guessing she fulfils the "nerdy but sexy young geek woman" trope that seems to be a requirement of all such TV dramas post-Willow Rosenberg. There is something slightly awkward and unconvincing about Rickards' performance. She is not awful, but she does not entirely convince.

Wentworth Miller seems to be having similar problems with Snart, playing the character as this weirdly creepy, whispering sort of sociopath who murders without hesitation just to steal a rare diamond. This sort of portrayal works in theory, but there was an overwhelming sense that Miller was simply trying a little to hard and needed to relax a little into the role. The episode makes it pretty clear he is going to be a recurring character, so hopefully he will loosen up a little and make the character a little less trite and forced.

Thankfully the episode itself is a pretty entertaining one. The opening truck robbery scene is great, and showcases Barry's growing abilities as the Flash - which he comes very close to announcing as his alter ego this week. The episode's climax, in which Barry rescues a dozen people from a crashing train, is the best thought-out action scene the series has done to date. Sure the CGI budget strains a little, but I'm pretty forgiving of that because the scene is well shot, very dynamic and shows me something thrilling and distinctive.

This is feeling like the series in a nutshell: high on visual and action ambition, but relatively low on original or well-developed characters. For a breezy, fun action series for a family audience, that's a combination I can actually accept with ease. The word than comes to mind when thinking about The Flash in comic book form is 'fun', and that's definitely what they seem to be aiming for here. The quality ratio rises to 75 per cent.
Posted by Grant at 10:29 PM